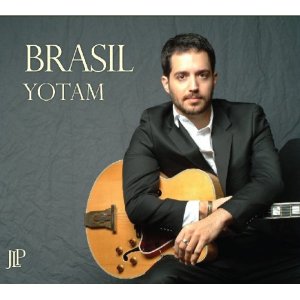 The music of Brazil has always had a strong pull on jazz musicians, and Israeli guitarist Yotam, who has spent the last couple of years establishing himself on the New York jazz scene, is no exception. His tone is perfect and his chops topflight on this rundown of songs written by some of the biggest proponents of the music of South America.

The opening “Influencia do Jazz,” written by Carlos Lyra, mixes the music of Brazil with jazz via an immediately memorable melody and a gorgeous series of changes that Yotam’s solo dances nimbly around. While it’s indicative of his uptempo skills, his playing on several ballads is every bit as interesting. Jobim’s “Falando de Amor (Words Of Love)” gives Yotam and guest flugelhornist Roy Hargrove a chance to show a quieter side without giving up any intensity. The other ballad is the only Yotam original on the record, “Nocturno.” It’s a contemplative song with an airy vocal accompanying the guitar. It features another guest, Toninho Horta, on acoustic guitar.
When Yotam brings his jazz background into the equation, the perfect amount of cool slips through on “O Barquinho (My Little Boat),” casting aside any doubts about the connection between the two kinds of music. The band has a little bit of fun with the song, quoting “Tequila” before it ends.

Brasil continues to establish Yotam as one of the young lions on the New York jazz scene.