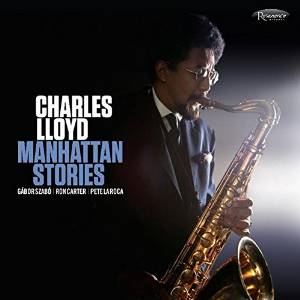 In 1965, when these previously unreleased tracks were recorded at two New York venues, saxophonist/flautist Charles Lloyd and guitarist Gabor Szabo had recently left drummer Chico Hamilton’s group – an incubator for numerous jazz greats. Within a year, Lloyd got as close to being a rock star as any jazz artist of the period, with a quartet sporting Keith Jarrett, Cecil McBee, and Jack DeJohnette, and Szabo released Spellbinder, whose “Gypsy Queen” was later grafted onto Santana’s cover of Peter Green’s “Black Magic Woman.”

Both enjoyed crossover success, with Szabo unafraid of being labeled “commercial” – sort of the guitar’s equivalent of flautist Herbie Mann. But on the six cuts spread over this double-CD, clocking in at 80-plus minutes, they spearhead perhaps the most formidable super-group either would enjoy, with Ron Carter (at the time, Miles Davis’ bassist) and Pete LaRoca (who’d drummed with Bill Evans, Sonny Rollins, and John Coltrane).

In the liner notes, Lloyd accurately states, “This is a music of freedom and wonder – we were young and on the move.” He and Szabo were breaking down barriers, experimenting with Indian music – heightened by Szabo’s trademark use of a Martin dreadnought with a DeArmond soundhole pickup.

Like their previously unreleased performances by Coltrane, Evans, and Wes Montgomery, the nonprofit Resonance label’s package befits these jazz giants, with a 36-page booklet with insightful essays and photographs.