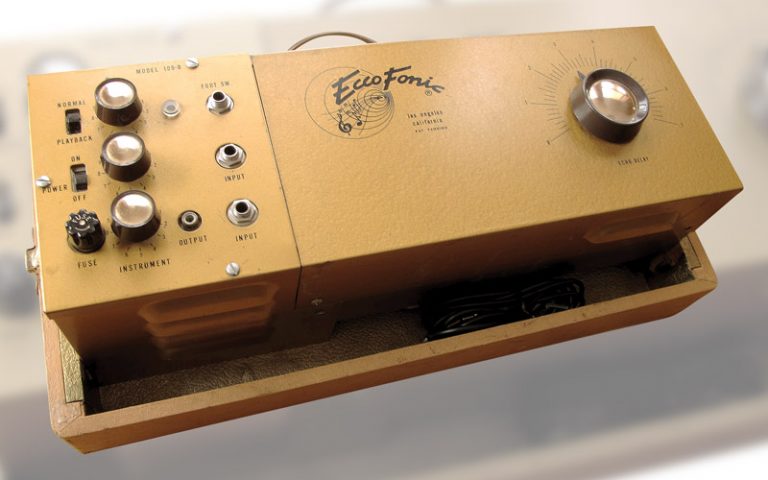 John Adomono was an American guitar hero of the Cold War years. JFK named him his favorite guitarist, and Adomono played a command performance at the White House. He performed on “The Ed Sullivan Show,” jammed with the likes of Frank Sinatra, Duke Ellington, and Martin Denny. And at the dawn of the Space Race, he released several LPs of far-out tiki and spacey exotica music.

Adomono was a guitar hero in part because he had a secret weapon in his arsenal.

“John played alone, but most people thought there were five or six players on his records,” remembers Lu Woolley, his promoter and booking agent. “People were absolutely wowed by him. Nobody played like him.”

Adomono’s secret weapon was the Ecco-Fonic, a cutting-edge tape-echo machine. Alongside DeArmond’s Tremolo Control, it was one of the first stand-alone effects for the guitar. The Ecco-Fonic was also a testy, fidgety machine to use. It was never produced in great numbers, embraced by guitarists, nor widely distributed. Yet it remains a guitar milestone. And Adomono was one of the early testers, promoters, and endorsers.

Adomono was Romani. Born in the 1930s, he was playing guitar on the streets of New York City for spare change when he was five years old. He met fellow Roma Django Reinhardt during his sole U.S. visit in 1946, and was inspired to play jazz. But it was Adomono’s introduction to one of Ray Butts’ EchoSonic amps that spurred his fascination with echo and helped create the sound that made him famous.

In the late ’50s or early ’60s, Adomono was playing in Memphis when he met local guitarist John Arnold and borrowed his Gretsch 6120 and EchoSonic amp with built-in tape echo. “He would just play the crap out of it,” Arnold says. “He was amazing. He could get more out of a guitar than anyone that I had ever heard. This was his first time playing with a portable echo chamber. He was so enamored with the thing doing echo and making him sound like more guitars.”

Butts built the EchoSonic in small numbers and mostly sold them by word of mouth, primarily around Memphis. Adomono was on his way west (he would play for decades in Las Vegas at the Thunderbird Hotel, in Honolulu and L.A. at Donn Beach’s Don the Beachcomber lounges, and up and down the West Coast). While in Southern California, he discovered the Ecco-Fonic, which, like the EchoSonic, was largely a regional “secret” despite the builders’ best efforts.

The Ecco-Fonic was the creation of Ray Stolle, who ran a radio-and-TV repair shop on Sunset Boulevard in L.A. No one seems to remember his inspiration or motivation for the tape-echo machine. He built a prototype circa 1959 that differed from the EchoSonic in that the second playback head was adjustable, allowing musicians to fine-tune the time between the original note and echo. As an early flyer touted, “The Variable Delay Control permits the player to select any rate of straight echo playback desired. This can be from a microsecond to as much as a full half-second delay.”

The first Ecco-Fonic had two control knobs: one for delay, the other for Reverberation, which was supposed to control volume decay on the echo. The machine also included an Echo Selector Switch that allowed players to record a short segment, then play along with the loop.

Stolle somehow hooked up with Fender, and the Ecco-Fonic was first promoted in a single-page Fender Sales flyer in summer ’59 as well as Fender’s ad insert in the annual Down Beat magazine guitar issue. But, as John Teagle reported in Vintage Guitar in 1998, Fender Sales chief Don Randall, “reportedly was not impressed with the reliability and test-user satisfaction” of the machine. Among other issues, the first Ecco-Fonic was mounted in a gold-painted metal box with a one-piece top that hampered easy servicing – and as Ecco-Fonic users quickly discovered, the unit needed constant oiling of the motor, head cleaning, and tape replacement.

Stolle lacked the finances to develop his design, so he sold out to E.S. “Eddie” Tubin, who started manufacture of the Ecco-Fonic at 905 S. Vermont Avenue, Los Angeles. Tubin refined the device with the aid of Adomono, guitarist Del Casher, and other early testers. A three-knob version appeared in late ’59, followed in 1960 with the four-knob Model 109, which added an Instrument volume pot blending wet and dry signals.

Tubin’s revised Ecco-Fonic sported a two-piece top, making service access simple. And the tape speed was revised from the 15-inches-per-second of the initial versions to 7.5 IPS, for better fidelity.

The 109 was superseded in autumn, 1960, by the 109-B with a rearranged four-knob control panel and the elimination of the Reverb switch. Thanks to the updates and advertising, the 109 was likely the first Ecco-Fonic to sell in significant numbers; as one ad shouted, “Stepped up production is our response to phenomenal acceptance.”

In 1961, the company was sold again, this time to industrialist Milton Brucker. Early 109-B models carried the legend “Los Angeles California” below the modernistic Ecco-Fonic logo; later versions sported a straighter logo and the address “Hollywood 28 California,” as production moved to Santa Monica Boulevard.

The 109-B was followed by a 109-C with multiple playback heads. This version came in a black-painted case and was likely built in small numbers. Brucker also announced plans for other Ecco-Fonics for churches, auditoriums, and radio stations with the model names Singalong, Vaudevillian, and Encore as well as the console Broadcaster model. It’s unknown how many – if any – of these others were ever made.

In the fall of ’62, Ecco-Fonic was bought out by electrical engineer Bob Marks, who moved shop to Pico Boulevard. With help from chief designer Russ Allee, Marks spearheaded the creation of a solidstate Ecco-Fonic to be distributed exclusively by Fender. Chicago Musical Instruments had taken over production of the Echoplex tape-echo machine under its Maestro line to accompany its Gibson guitars. So Fender rechristened the Ecco-Fonic as the Fender Echo.

The quirkiness of the Ecco-Fonic design always held it back, whereas the Echoplex, thanks in large part to its tape cassette, proved reliable and easy to operate. Fender offered its solidstate machine for several years starting in ’63, but it never sounded as good, and the Echoplex dominated the market. Orders dwindled, and the Fender tape machine was retired. The company soon switched to Tel-Ray’s simpler, but less-effective oil-can echo unit.

John Adomono never gave up on his Ecco-Fonic, however. As a solo guitarist, it was vital to his sound.

“He always used that echo,” promoter Woolley remembers. “He was just one person with one instrument, but the sound blew people away. Women from age 21 to 80 would go crazy for him, and send napkins with notes, trying to make contact.”

One of the most astounding examples of Adomono’s guitar work appears on his 1974 private-label LP Gypsy, which was funded by Woolley and others. Picking his archtop Guild through his tried-and-true Ecco-Fonic, he plays Rimsky-Korsakov’s virtuosic showpiece “Flight Of The Bumblebee,” his fleet picking resounding in multiple layers of warm echo, thanks to his old echo chamber in a box. It’s a masterpiece of guitar music. 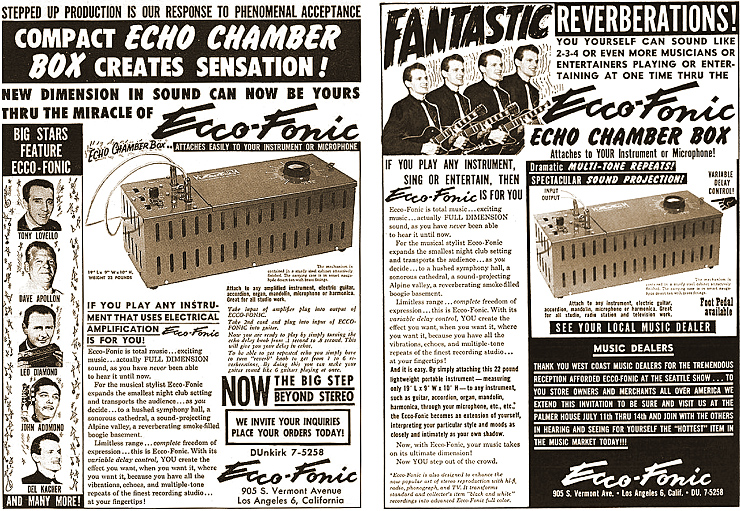