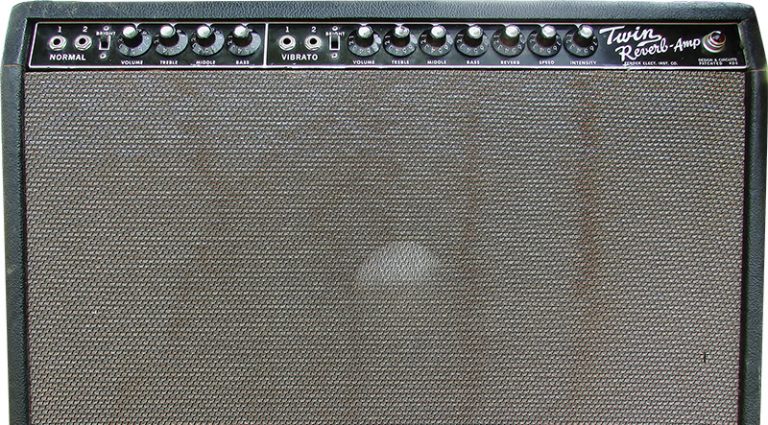 The Twin has long been the flagship of Fender’s high-wattage amp lineup, and it achieved/retained that status through several iterations in the company’s formative years. In the October issue, we studied a rare early-’54 “wide-panel” tweed Twin from the era of sub-50-watt amps. After the bump up to 80-plus watts, then a brief pit stop at the blond Twin, the blackface Twin Reverb was the next rung on the evolutionary ladder – and arguably the last true classic rendition of the Twin format.

This amp – a verified 1963 model, is the earliest Twin Reverb we’ve ever seen. It’s also somewhat self-contradictory in that it lacks the very feature that gave the Twin its name in the first place, having just one speaker. But bear with us; a look at this incredible amp’s history will pull it all together.

Most reports talk of the blackface Twin Reverb being introduced in late ’63, but we have yet to see one that dates entirely from that year. They are extremely rare – if they exist at all. Some owners will claim to have “a 1963 Twin Reverb,” but closer examination usually reveals a few components that date to that year alongside others that indicate final assembly in ’64 (this occurs with lots of gear from Fender and other big manufacturers because parts sat on shelves for months waiting to be pulled a year or two after the components themselves were made). This Twin Reverb, however, not only contains no part dated later than November ’63, it also comes with a letter of provenance from its original owner – none other than pedal-steel player supreme Walter Haynes, who used the amp on more than 1,000 recordings.

Haynes, who died January 1, 2009, at the age of 80, had a stellar career in the golden age of country music. He was an inductee to the Steel Guitar Hall of Fame who worked with Patsy Cline, The Everly Brothers, Jimmy Dickens, Del Reeves, J.J. Cale, Ferlin Husky, Webb Pierce, and many others. He was also a producer, a vice president at MCA Records, and a Grammy-winning songwriter. Given his prowess in the field, Haynes was sought out as a Fender endorsee, and as a result developed a close personal relationship with Leo. According to Haynes’ account (and a letter of verification he passed along with the amp), this Twin Reverb was completed by Leo Fender on November 26, 1963, following the steel player’s request for an amp with these particular specifications.

The amp’s current owner, Ross Southerland, is a guitarist who worked with Haynes in the latter part of his career and has also played with Charlie Hodge, D.J. Fontana, J.D. Sumner, and others. He bought the amp in ’93 (Haynes signed the inside less than a year before his death, after Southerland had owned it for several years).

The most obvious changes in the Twin Reverb’s transition from the blond-Tolex Professional Series amps of 1961-’63 to the blackface amps as exemplified by this one (speaker aside) were the addition of the tube-driven spring reverb and the change from the complex harmonic vibrato to an opto-cell tremolo circuit, both of which acted on the amp’s second channel only. The blackface amp also gained a Middle control on both channels (something present on the high-powered tweed Twin of the late ’50s but missing from the blond), and the Presence control, which governed high-end content via a network tapped from the negative feedback loop around the output stage, was dropped. Instead, the amp carried bright switches on both channels, which worked very differently in that they added or removed a bright cap to the channel’s volume potentiometer, therefore acting on an entirely different part of the amplifier. Also, higher voltages on the plates of the tubes at the first gain stage of each channel lent a tighter, cleaner tone up front.

All of the new blackface features, Leo might have surmised, were well-suited to the kind of combo a pedal-steel player like Walter Haynes would require, other than one – steel players favored 15″ speakers, and the Twin, by definition, carried two 12″ speakers. The fix for that was simple; give this prototype a non-standard baffle fitted with a single 15″. It also had a transitional grillecloth not used in production amps, but seen in the first Twin Reverb promoted on the cover of Fender’s 1963/’64 catalog. The modification was one that several steel players have requested on Twin Reverbs in the years since. According to Southerland, though, the first 15″ speaker with which this Twin Reverb was equipped – now lost to the scrap heap, but likely a Jensen P12N or C12N – wasn’t up to the task, and bit the dust quickly.

“Walt blew the speaker on the very first thing he used it on, an Everly Brothers record in ’63. So, he called Leo to tell him it blew, and the story goes Leo himself walked outside that day, when one of the Lansing guys just happened to be there, to get [a new JBL D-130] out of the trunk of his car. Leo purchased the speaker to send to Walt, and that’s the one used on all of the hits Walter recorded on many different labels – and is still in the amp now. I did recently re-cone the speaker.”

Other than the speaker and minor maintenance to keep it on the road (replaced filter caps, a new power cord) the amp remains all-original.

So, there we have it: an early transition along the road to a legendary amp, this Twin also represents a significant piece of country music history.