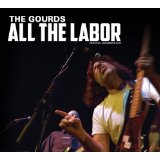 In October 2013, a mere month after releasing their 10th LP (and 19 years after forming), the Gourds announced that they were taking a hiatus. With the Austin, Texas, alt-country quintet’s new album (produced by Larry Campbell) barely a month old, the timing was curious.

All the Labor reveals some possible reasons for the band’s sabbatical (though ﬁlming ended a year and a half before their break was announced). Shot over the course of eight months by Doug Hawes-Davis, this documentary hints at friction between the Gourds’ dynamic principle songwriters, Kevin Russell and Jimmy Smith, and reveals the challenges of balancing growing families with touring. There’s even discussion of the band’s Napster-era cover of Snoop Dogg’s “Gin And Juice,” a proto-meme that became a millstone around the band’s neck. Meanwhile, archival VHS footage provides fantastic historical context.

If Labor suffers at all, it’s from a lapsing narrative that sometimes threatens to sour the works with an infomercial vibe. Hawes-Davis does a ﬁne job rescuing it, however, by capturing the Gourds’ obtuse lyricism, hell-raising live act, and music that is (we’ll refrain from the past tense) equally steeped in the Band’s musicianship, Doug Sahm’s cosmic weirdness, and ’80s punk energy.