Straight-from-the-catalog instruments are fun – and reassuring – because you know exactly what you’ve got. But there’s another kind of thrill – and satisfaction – when you find something that’s totally off the radar, something that presents a mystery to be solved, like this circa 1913 Cole’s Eclipse banjo, which sports a Washburn headstock and atypical decoration!

The Cole brothers, William A. and Frank E., were based in Boston and played a very important role in the first golden age of “classic” banjos at the end of the 19th century. The city was, according to many banjo enthusiasts, one of the two key centers of banjo-making during that period (the other being Philadelphia; New York and Chicago were important more for manufacturing prowess than design innovation at the time).

The Philly school was led by Samuel Swaim (with an “m”) Stewart, who probably did more than anyone to popularize – and legitimize – the banjo. He famously favored wood-rimmed banjos with metal-clad “spunover” construction where a sheath of shiny metal was wrapped around the outside and curled or rolled over the top edge to let the head sit atop a kind of hollow tube.

The Boston school (likely preferred by modern players) was more into developing various types of “tone rings” – metal rings of various designs that sit on top of the rim, between the head and wooden shell. They can be round or scalloped, solid or hollow – whatever the particular inventor thinks will improve the banjo’s sound. The evolution of tone rings is one of the central themes in modern banjo history. The main leaders of this arena were Albert Conant Fairbanks and the Cole brothers.

Banjos, invented by slaves, became popular in white America (and England) in the two decades preceding the Civil War, when blackface minstrelsy was created and spread, marking the beginnings of what would become Vaudeville. They came on even stronger following that conflagration, eventually invading the parlors of even the most polite society.

One of those parlors was that of a family in Sterling, Massachusetts, where A.C. Fairbanks (born 1852) was attracted to the banjo. He moved to Boston and began building banjos in 1875.

By the 1890s, W.A. Cole was performing as part of the successful Imperial Quartet, and teaching in Boston. As frequently happens, Fairbanks (the manufacturer) figured it would be convenient to team with a popular performer who could help promote his wares. In 1880, they formed Fairbanks & Cole to make banjos. During this partnership, the legendary banjo designer David L. Day joined the company. Just as Cole was ready to strike out on his own, Day invented the famous Electric tone ring. Basically this was metal ring with a flat surface that rested on the rim, and an upper edge with wide scallops with points spaced about the same as the brackets. A round steel rod sat atop the scallops and carried the skin head.

Cole continued to perform and in 1890 left Fairbanks & Cole to start W.A. Cole, Manufacturer with his younger brother, Frank, who was a cabinetmaker. Frank was in charge of banjo production, and was awarded three patents – one for a mandolin (1891), one for the Eclipse tone ring (1894) and the Cole bridge (1899).

Structurally speaking, the banjo you see here is regulation Cole’s Eclipse Custom Professional Special – one of their better grades. It has the Eclipse tone ring, a black-lacquered laminated mahogany rim, and one-piece mahogany neck with the so-called boat heel. The floral abalone headface inlay and pearl-diamond inlaid ebony fingerboard are also typical of that model. The head is a modern pre-mounted calfskin, and the head tuners are replacement two-band style. The dual-bridge arrangement was the Cole style, here with two reproduction Cole bridges made by Missouri bridge maker Don New. Serial number is 3951, which would place it around 1913. 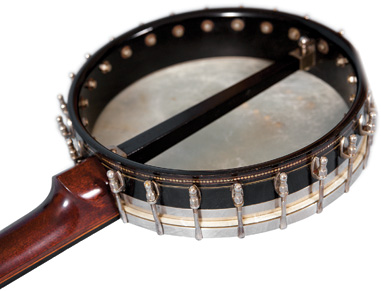 Dating would tend to be confirmed by the mysterious presence of an atypical Washburn-style headstock. This anomaly may be explained when we realize that Lyon & Healy’s new line of banjos introduced in 1913 included a number of banjos sourced from Rettberg & Lange in New York and a version of the Cole’s Eclipse, albeit a different model than this banjo. However, the Cole-made Washburn banjos were badged “Washburn.” This banjo’s dowel is stamped “Cole’s Eclipse,” so the Washburn-style head mystery is unsolved.

The beautiful band of abalone dots around the bottom of the pot also remains a mystery, but thank goodness they’re there! Cole may just have wanted to differentiate this from its catalog models. Could this have been a sample or prototype made for Lyon & Healy, with dots to lend appeal and help close the deal? We’ll likely never know.

In 1904, A.C. Fairbanks burned down. Its trade names and patents were purchased by The Vega Company and became the basis of that company’s banjo line. W.A. Cole died in 1909, and Frank soldiered on until 1922, when he sold Cole to the drum maker Nokes & Nicolai, which continued to make Cole banjos. The Liberty Musical Instrument Co. of Chicago bought Cole in 1926, briefly producing Liberty (not Cole) banjos until it was taken over by Slingerland, though by that time the banjos had little resemblance to Cole’s designs.

If you had a catalog-perfect Cole’s Eclipse – even one of the Washburns – you have a handsome, fine-sounding, professional-grade banjo. But having one that’s all that plus an alluring mysterious back-story, well…