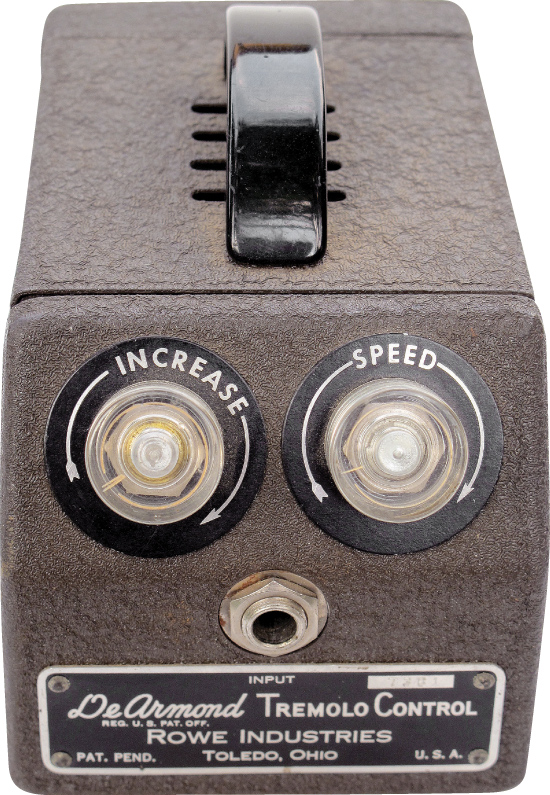 “We first heard the effect not knowing what it was,” he says, speaking in the royal plural and summoning up recordings including Muddy Waters’ 1953 Chess cut “Flood” and other early blues and rock-and-roll sides where that tremolo sound shimmered. “It was not until we took a gig in 1972 with Bo Diddley, who told me about it. We were speaking about what his sound was, and I said, ‘DeArmond Tremolo Control – I don’t think I know what that is?’ Bo Diddley planted the seed.”

It’s little wonder that even Gibbons, a renowned purveyor of rare and weird sounds, didn’t know of the effect; in the ’70s, the Tremolo Control was already “vintage” when other now-classic gear was just “used.”

Harry DeArmond was a visionary. As the story goes, it was his 10-year-old brother, John, who first crafted a guitar pickup in 1935 from the coil off a Ford Model A. As older brothers will, Harry borrowed the idea and took it to market. In ’39, he launched what was likely the first production guitar pickup attachable to any acoustic guitar. His pickups became standard fitted features on instruments made by Gretsch, Rickenbacker, Harmony, Epiphone, and many more.

DeArmond’s products were manufactured and sold by Horace “Bud” Rowe’s Rowe Industries, a wire- and electronics-maker in Toledo, Ohio. Rowe began in 1931 with Fox Electrical & Manufacturing, producing sound equipment for the brave new world of talking films. DeArmond was employed as a design consultant by Rowe. His own company was known as DeArmond Research, which, as the stationary stated, made “Electrical Music Instrument Devices.”

“Device” was as good a term as any in those days before the proliferation of stompboxes and foot pedals. The idea to corrupt a guitar’s clear sound was perhaps inspired by accordionists, one of the most popular instruments of the day, where manipulating the bellows created all sorts of “effects.” Or it could have come from horn players, who waved saucepan lids or toilet plungers over their bellmouths to modulate their sound. Or perhaps from organs, where tube amps featuring tremolo were offered as early as the ’30s.

But why? As a 1955 brochure explained, “Solos can now be a hit, featuring a performance to which the guitarist can point with pride. Straight chords, which soon become tiring, will, with the Tremolo become beautiful and refreshing…”

A digression is necessary here: “Tremolo” and “vibrato” are often confused, thanks to over-zealous marketing by guitar-gear makers. Vibrato is the modulation of pitch. Tremolo is a more ambiguous term: It’s sometimes used to describe the quick repetition of a note. But in most cases it denotes the raising and lowering of a note’s amplitude.

DeArmond’s Tremolo Control did just this. It debuted in about 1946; the earliest known brochure is dated July of that year, according to historian Dan Formosa. “This precedes guitar/accordion amps with tremolo (the Premier/Danelectro amps date to 1947 and Gibson to 1948)… It’s most probable that the use of tremolo by guitarists would pre-date the commercially available units (otherwise, why would the manufacturers be prompted to create amps or effects units – unless it was an accordion thing),” he notes. “The earliest recorded guitar tremolo I’ve come up with (so far) is Roosevelt Sykes, 1941-’44.”

The Tremolo Control is a quaint electromechanical device. Hiding within that small metal box is an electric motor with a driving spindle that shakes a vial containing electrolytic liquid. The electrical signal runs through that fluid; as it sloshes up and down, it allows more or less signal to pass, and the volume modulates.

The vial in the earliest versions was made of glass; subsequent vials were brass. Knobs on the first versions were black chicken-head affairs, changing later to a clear hatbox style.

The effect was listed in brochures variously as the Trem-Trol, Model 60 or 60A, though Carvin and perhaps others labeled it the 601; today, the model numbers are used interchangeably. It was followed by the 60B in a plastic housing that was built into the ’60s. DeArmond also offered the Model 800, combining the Tremolo Control with their Model 600 volume pedal.

The Tremolo Control has just two controls; Increase (controls amount of tremolo) and Speed (adjusts how fast that vial shakes/speed of the modulating signal). “You can go from mild to wild,” Gibbons explains. “Some people might call it ‘Depth.’ I call it, ‘How Far.’”

After Bo Diddley enlightened Gibbons to the Tremolo Control, he sought one. Plugging in, however, he was unimpressed. Little did he know, but his Tremolo Control was suffering from a common ailment of the unit after so many years.

“Many users discarded them or left them behind because they claimed they didn’t work,” Gibbon relates. “But in reality it was just the simple fact that the electrolytic liquid had evaporated. We fooled around and fooled around [with ours] and said, ‘Gee whiz, this thing doesn’t seem to be doing anything,’ and that’s when we took it apart and poked around, and an electronics specialist who worked at the recording studio smiled and said, ‘Oh, you fellows don’t know about that: this unit is missing the fluid.’ I said, ‘What went in there?’ And he said, ‘Well, I’ll tell you what will work, and that’s Windex.

“So we thought, how are we going to get it in there? The little canister has a soldered, sealed top; you don’t unscrew it – it was soldered shut. But it does have a rubber gasket. So you need to find a syringe, load it with Windex, stab it in there, and fill it a little less than two-thirds up.

“So this is where the fun begins. We went down to the nearest drug store with a bottle of Windex and threw this contraption on the counter, and we said to the pharmacist, ‘We need some syringes.’ He saw us with that bottle of Windex in our hands and this thing and he said, ‘Either explain yourselves or you’re going to jail.’ But sure enough, we slated a good story and he scratched his head and smiled and said, ‘This is a first for me, but I don’t think we’re breaking any laws. Open her up!’ So we gave it an injection, and all of the sudden, back at the studio we had tremolo, brother!”

Gibbons first used the Tremolo Control on “What’s Up With That” from ZZ Top’s 1994 album Rhythmeen. From there, he never looked back. “We’ve used it on so many delightful excursions from the recording studio into the outer limits of the ether… We gained some measure of notoriety for using this thing exclusively. The mystique is quite entertaining.”

He told his fond tale of discovering the effect while recording a new album, featuring a “stereo” Tremolo Control setup. “We have two of them mounted in a convenient pull-out drawer and we’ve wired them so the guitar signal plugs into the drawer that feeds DeArmond Tremolo No. 1, which is the left signal, and DeArmond Tremolo No. 2, which is the right. The driving spindle is not notched; there are no presets. So if you’re trying to get them to jiggle at the same rate, good luck! It ain’t going to happen. But when you get two Tremolos operating at two different speeds, it really gets wild.”