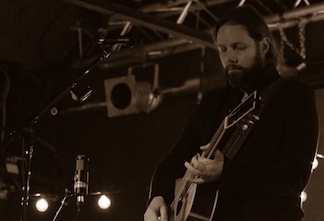 Rich Robinson, guitarist, songwriter, and co-founder of The Black Crowes, is set to embark on a solo – mostly acoustic – tour with five guitars, including a newly restored Guild 12-string, two vintage parlor models, a jumbo, and a Teye electric.

Robinson will perform material from his recent album, The Ceaseless Sight, and its two predecessors, Through A Crooked Sun and Paper. He’ll also perform traditional folk blues along and cover songs by Bob Dylan and Buffalo Springfield.

“I enjoy the simplicity of acoustic shows, where I can break a song down to its purest form,” he said. “It’s closest to the way I write them.”

The tour starts July 31 in suburban Indianapolis and will cover 13 markets in 16 days with stops in Nashville, Memphis, Pittsburgh, Richmond, and Atlanta.