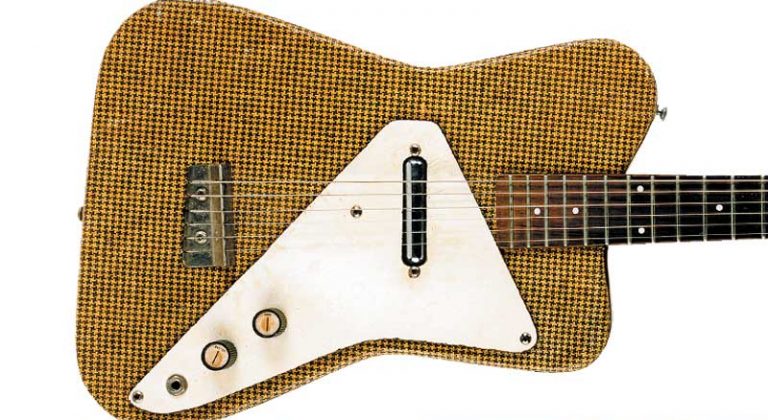 In his book, Neptune Bound: The Ultimate Danelectro Guide, author Doug Tulloch charts the adventures of Nat Daniel as he rode the electric guitar boom of the 1950s and ’60s to fame and fortune – though neither was important to him.

With Neptune Bound, Tulloch in part aims to correct Guitars From Neptune, a 1996 book on Danelectro which he co-authored but considers somewhat incomplete and not well-produced. Here, he adds content for collectors in the form of a section on identification and serial numbers, as well as catalog reproductions, recollections of those involved with the company first-hand (including musicians who used the instruments), a complete history of the company’s growth and rather sudden death, and dozens of period photos from the original factory.

Daniel was a gifted inventor, innovative production engineer, and savvy marketer. His design principles and production methods were geared toward low cost, but not at the expense of playability. They may not have led to instruments which would stand up to the rigors of touring or any sort of “industrial” use, but they were perfect for the beginner, and priced so skittish parents could invest in their child’s musical future with no significant loss if things didn’t go as planned.

Daniel’s arrangement with catalog retailers Sears and Montgomery Ward provided a huge boost for his approach to producing musical equipment. Where Fender and Gibson needed to mount annual (and expensive) exhibits at trade shows to secure orders, Daniel would receive orders from the two retailers who sold items via catalog and retail outlets in metropolitan areas. Much like today’s internet, those catalogs provided goods no matter a customer’s location or circumstance; whether you were in the snowy upper Midwest, New York, or Los Angeles, you simply filled out the form, wrote a check, and dropped it in the mail. A few weeks later, the postal service delivered a guitar to your door. Couple efficient production with low price, efficient distribution, and a product of reasonable quality, and you have the recipe for success.

In the mid 1960s, Danelectro sold tens of thousands of guitars, amps, and associated instruments. One of the best-selling and historically noteworthy was the model 1448 (one-pickup) and 1449 (two-pickup) guitar with an amplifier built into its case. While not a completely original concept (it had been used by some lap steel manufacturers since the 1940s), its application to a Spanish guitar was new and different.

One of the more amazing outcomes is that for all their low-cost, efficient design, early Danelectro instruments have held up. Not only are they collectible (and still inexpensive, on a relative basis), but many respond well to adjustment and are quite playable, in contrast to many import guitars from the ’60s.

As Daniel’s son, Howard, points out in the first-person introduction to the book, Daniel’s primary interest was to produce instruments that were affordable and playable. In this excerpt, Howard outlines some of the approaches his father took in creating the guitars and production techniques that would eventually make the Danelectro just about everyone’s first guitar.

The Danelectro years were marked by a series of innovations. Between 1949 and 1969, my dad secured a total of eight patents – on vibrato (tremolo, or, as he dubbed it, “Vibravox”) and reverberation (“reverb”) systems; a loudspeaker cabinet with inclined baffles (the “Acoustic Case,” designed to boost bass response by lengthening the sound wave path from the back to the front of the speaker); a combined bridge, tailpiece and manual vibrato for guitars; and the electric sitar, which faithfully reproduced the unique sound of the classic Indian instrument but could easily be played by any guitarist. My father also patented – way back in 1953 – an electric organ that foreshadowed a basic principle of some of today’s synthesizers, but reproduced true tones of many instruments in analog rather than digital fashion. He never put it into production, however.

However, Nat Daniel did not patent most of his innovations, which also included:
• the first six-string electric bass (1956).
• the first 12-string electric guitar (1961 – the “Bellzouki,” developed in collaboration with Vinnie Bell and inspired by Greek bouzouki music from the film classic Never on Sunday).
• a 31-fret “Guitarlin” (1958) with a deeply cutaway “longhorn” body that enabled a guitarist to play an extra 10 frets into the mandolin range.
• an amplifier and speaker built into a guitar carrying case (this was done for Sears, which sold the Silvertone “amp-in-case” and guitar for under $50 as a set for novice players).
• a “convertible” guitar that could be bought, inexpensively, for beginning students, as an acoustic, and later, with the purchase of a pickup kit, turned into a semi-hollow-body electric.
• total shielding of guitar and amplifier circuits to protect against hum from neon signs, motors or other sources of electrical interference (he introduced this at a National Association of Music Merchants show, with Vinnie Bell demonstrating Danelectro guitars and amps while sitting right next to a glowing neon sign; the Danelectro products sounded crystal clear, while a specially assembled “Brand X” guitar, lacking the shielding, hummed noisily every time Vinnie plugged it in).
• guitar necks that never warped because they were reinforced with twin steel I-beams.
• the use of inexpensive, yet strong and stable composite materials in both amplifier cabinets (Homasote, particle board) and guitar bodies (Masonite, Formica).
• a guitar neck-tilt adjustment system “nearly identical” to the one Fender used – except that Danelectro did it a decade earlier and didn’t bother to patent it.
• a “master-slave” amp system with 300-plus watts of distortion-free power (back in 1956).
• a hybrid vacuum tube/solid-state amplifier (1968).

By beginning the design process by first seeking to understand the qualities that were most important to musicians, my dad was able to figure out how to incorporate these characteristics in his products at low cost without compromising quality. That, to take just one example, is why he employed inexpensive materials like Masonite and Homasote, which some people derided at the time. But these materials did the job for which they were intended perfectly well, and they held costs down.

In his autobiography, Joseph N. “Joe” Fisher, Sears’ principal musical instrument buyer from 1959 to 1968, wrote that “Nat was an innovator who understood the principle of ‘rigid control of expense,’ an example of which was his innovative and inexpensive… magnetic pickups used in electric guitars. He made them from surplus (actually, they were not “surplus” at all) lipstick tubes, bought from a cosmetics manufacturer. He inserted the electronics in the tubes and produced the lowest cost guitar pickup in the industry.” Low-cost they may have been, but their innovative design makes them still highly sought-after by many guitarists today, who love their distinctive sound as well as their “cool” appearance. (Fisher admired my father for more than his innovativeness and ability to keep costs down. He also wrote, “I think the reason I respected people like Nat Daniel was because he disagreed when he thought my ideas were off base, even though I, representing Sears, was his economic lifeline.”)

Perhaps the best example of marrying high quality, low cost and innovative production methods was the Danelectro guitar neck. First, my father wanted a neck that would not warp or bow. He thought the traditional approach to this problem – an adjustable rod to counter the bowing effect of the strings – was a poor, “Band-Aid” solution. He wanted a neck that would simply never bow. So first he aged the poplar wood used for the necks in a climate-controlled drying room. Then, in building the necks, he reinforced them with twin steel I-beams. These necks just would not bow – Danelectro hardly ever received an instrument back for repair or replacement because of a complaint about the neck. (And guitars that came back for other repairs, even after many years, never exhibited bowing problems. ) 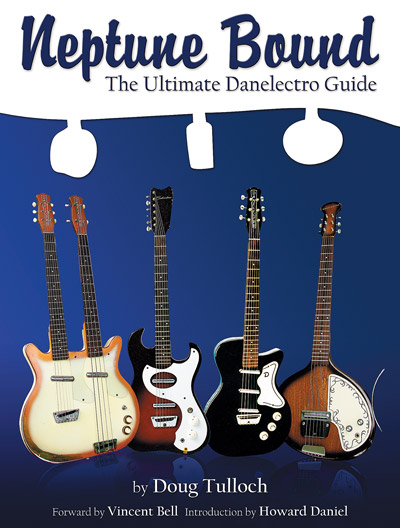 In addition to designing all of Danelectro’s products, my father also came up with manufacturing equipment and processes that saved time and money. In the case of guitar necks, for example, he kept costs low and quality high by designing and building a unique, proprietary machine to finish the surface of the fingerboards (Brazilian rosewood, a handsome, durable material) to the exacting standards required. Like so many other elements of the manufacturing processes he designed and developed, this device made it possible for employees who were not craftsmen to produce 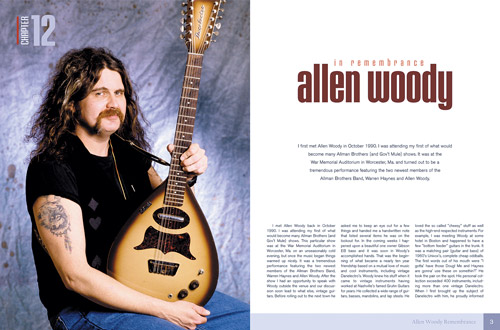 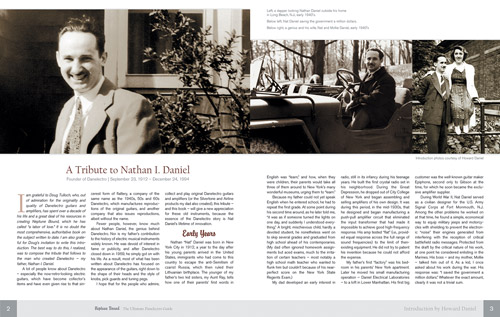 craftsmanlike results. The fingerboard-finishing machine was a horizontal, cylindrical frame, the length of a standard neck, with two large, circular wooden hoops forming either end. The outside rim of each hoop was fitted with clamps that allowed necks with unfinished, unfretted fingerboards to be laid lengthwise along the cylinder, fingerboards facing out, and secured at each end. The finishing was done automatically by a table saw. When the saw was turned on, a link to the cylinder started it slowly rotating along its axis while simultaneously drawing the saw almost imperceptibly along a finely threaded, revolving bolt running underneath the cylinder from one end to the other. After some time, the saw blade had passed along the entire length of each fingerboard, shaving it to precisely the right height and leaving a perfectly finished surface. The only manual work required was for an employee to clamp the unfinished necks in place, turn on the machine, and come back a couple of hours later to remove the necks and start another batch.

As ingenious as my dad’s many amplifier and guitar innovations were, the manufacturing processes he developed were an essential element in producing high-quality products at low cost.

MCA closed Danelectro in 1969, but my father never looked back. When, over a decade later, he learned, almost by chance, of the continuing interest in the major portion of his life’s work, he expressed surprise, gratification… and, characteristically, bemusement.

Neptune Bound: The Ultimate Danelectro Guide is set for release in early 2008. Learn more at neptunebound.com. This article originally appeared in VG‘s Jan. ’08 issue. All copyrights are by the author and Vintage Guitar magazine. Unauthorized replication or use is strictly prohibited.