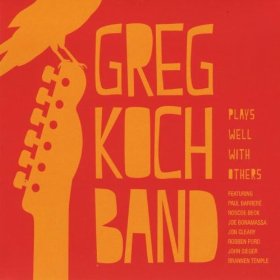 Due to his longtime residency in Milwaukee, Greg Koch may have not been discovered by the world at large. But that’s certainly not true among his fellow guitarists.

On his latest, Koch is joined by various musicians, including guitarists Robben Ford, Paul Barrère, and Joe Bonamassa, among others. The nice thing about the gathering is that it’s not a chopfest with everyone showing off. Instead, this is a collection of truly good songs.

That’s not to say there isn’t some ﬁne playing here, though. The slinky blues of “Walk Before You Crawl,” the sophisticated shufﬂe of “Sho Nuff,” and the rolling pop/ blues feel of “What You Got To Lose” all give Koch and Ford ample time to trade licks and play off each other. The songs also provide a partial reunion of the Blue Line as Roscoe Beck ﬁlls the bass chair.

Bonamassa and Koch honk and squeal their way through a rollicking “Simone.” And Barrère’s slide mixes perfectly with Koch on four cuts, including the gorgeously relaxed soul of “This Whole Town Has A Broken Heart.”

John Sieger sings and co-wrote the songs with Koch. Greg’s son Dylan handles drums on seven of the cuts.

Unlike some other Koch records, this is not so much a showcase of his guitar abilities, but a display of his ample all-around talents.