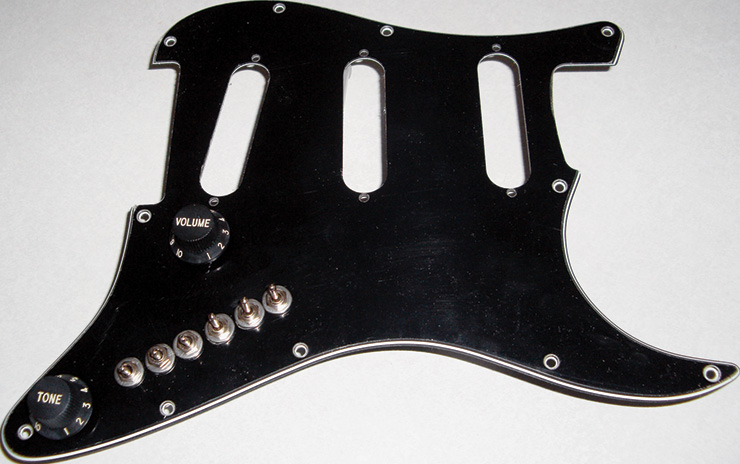 When Leo Fender was designing the Strat back in the early ’50s, he equipped it with a surplus three-way pickup selector. Three pickups, three choices – simple and straightforward. Players ever since have tried to unlock all of the sounds that a three-pickup guitar can offer, whether by simply positioning the pickup selector in just the right spot for that quacky “out of phase” sound (i.e., positions two and four), installing an aftermarket five-way selector, or adding push/pull switches or mini toggles.

Now Awesome Musical Instruments offers the key to unlocking 35 true analog tones residing in three-pickup guitars. The T3 Pickup Switch Upgrade comprises a proprietary system of six mini toggle switches, a master volume control, and a master tone control, all prewired into a custom-configured Strat pickguard with matching knobs. The T3 drops right into the guitar and uses the existing pickups as well as Euro-style push blocks for all the pickup and control connections. That means no soldering, just small wire cutters, pliers, and a Phillips screwdriver.

The first three of the T3’s six mini toggle switches turn their respective pickups on or off, either in or out of phase. The second set of three switches determines whether the pickups are connected in series or in parallel. There is a bit of a learning curve, but because everything is laid out it in a logical fashion, it’s not as bad as one might expect. When learning the system, it’s important to keep in mind that some switches won’t do anything to the sound unless more than one pickup is on.

The five familiar sounds (bridge, bridge/middle, middle, middle/neck, and neck, all in parallel) are easy to find with individual pickup switches. Two other useful pickup combos are also simple to find: the neck and bridge pickups in parallel for a Tele middle-position sound, and all three pickups in parallel for a fat but still snappy single-coil sound. Add the ability to switch any of the three pickups to true out-of-phase, for that thin, nasally tone, and the T3 presents a whole new sound palette. Granted, phase switches had their heyday in the late ’70s and early ’80s, and the low-fi sound has some limitations, but the option does add a cool retro vibe (especially when soloing), and really makes single tones jump. It’s a nice option.

For some really uncharted territory, the T3 can put the three pickups into the circuit in series instead of in parallel (as with typical Strat switching), creating a humbucker-style sound with two or all three of the pickups. The results are atypical of single-coil-loaded Strats – fatter and thicker with more midrange and less top-end sparkle. Sometimes the differences in tone from parallel to series switching can be a bit subtle and have a tendency to show more contrast when explored with some overdrive dialed in on the amp.

To be sure, it takes time to really explore all the possibilities the T3 Pickup Switch Upgrade has to offer, but it’s a fun trip that ultimately leads to some familiar classic sounds – as well as some cool new ones.