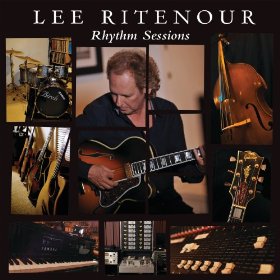 “Fat Albert Rotunda” lacks the horn sections of Herbie Hancock’s 1969 original, yet Ritenour more than compensates. Assisted by Rushen’s and Johnson’s keyboards and the basses of Miller and Melvin Lee Davis, they update the feel while retaining the original’s funk groove. On “Maybe Tomorrow,” he adds stinging embellishments in and around South African vocalist Zamajobe. His lines are likewise strong on “Spam-Boo-Limbo.”

The Ritenour originals vary in tone, from the medium-tempo “July” and “800 Streets by Feet’s” glimmering textures to “The Village’s” swirling textures.

Ritenour’s intent here was to showcase the great rhythm players of the moment, spanning generations, and those sure to make their mark in the future. Rhythm Sessions, thoroughly musical throughout, manages to do that admirably.