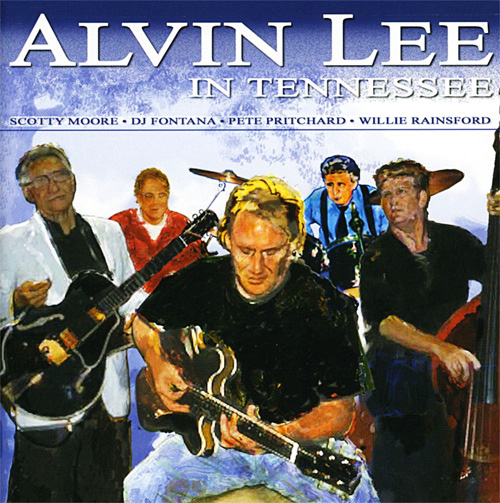 England’s Albert Lee provided one of Woodstock’s highpoints, with his band Ten Years After’s frenetic version of “I’m Going Home,” and Lee got caught up in the faster-is-better era. But as his sophisticated single-note and chordal work on Undead revealed, Lee had a solid grounding in jazz, revealing a familiarity with players like Barney Kessel and Tal Farlow.

Lee’s latest CD may be titled Alvin Lee In Tennessee (Rainman) because of where it was recorded, but it’s the album’s stylistic leaning, not to mention some very special guests, that reveal where the guitarist’s heart is. The session was cut in two days at the Nashville studio of Scotty Moore, Elvis Presley’s original guitarist, with Moore trading solos with Lee on two tracks and Elvis drummer D.J. Fontana providing the backbeat and swing throughout.

All 11 songs are Lee originals, and manage to fit the idiom without resorting to mere nostalgia – not an easy task in itself, especially when surrounded by one’s heroes. As Lee enthuses in the liner notes, “These guys put everything into the feel of the music. Being flashy or virtuoso does not come into it. Just get the feel and keep it in the pocket.”

Lee more than manages to get into that same pocket, while still displaying impressive chops, as on the extended outro to “I’m Gonna Make It,” where he’s obviously savoring the experience.

This article originally appeared in VG September 2004 issue. All copyrights are by the author and Vintage Guitar magazine. Unauthorized replication or use is strictly prohibited.