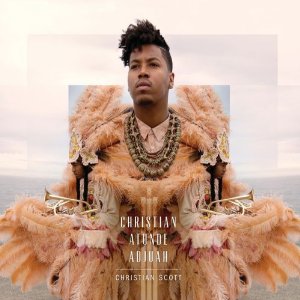 If you’ve been waiting for the future of jazz to arrive, this may well be it. The young trumpeter is creating a beguiling blend of post-bop, dark rock, and hip-hop – try to picture Miles Davis in Radiohead and you’ll be getting warmer. Better still, Christian Scott has a young, gifted band featuring guitarist Matthew Stevens, and his new two-CD set may be the one that ﬁnally pushes him over the top.

For a ﬁrst taste of Scott (who also goes by the surname aTunde Adjuah), cue up “New New Orleans,” where the horn man lays out a haunting melody over Stevens’ alt-rock-infused chord arpeggios. It’s hard not to be grabbed by the song’s uncanny, angst-ﬁlled groove.

One of the album’s keynote tracks, “Danzinger,” is buried in the back of the second disc, but is getting radio airplay and is fast becoming a contemporary classic. It’s a dark, brooding ballad that wouldn’t be out of place on a Peter Gabriel album, full of a beautiful melancholia and deep soul.

There aren’t many guitar solos, but Stevens opens up on “Vs. The Kleptocratic Union” with a beguiling lead. His tone is clean and compressed yet edgy, and his phrases use clever swirls of arpeggios and fast, complex lines that are unlike much of the jazz-rock clones out there.

This is a bold album and, arguably, a breakthrough. If you love brave, heart-wrenching instrumental music, check this album out. It could be a game-changer.