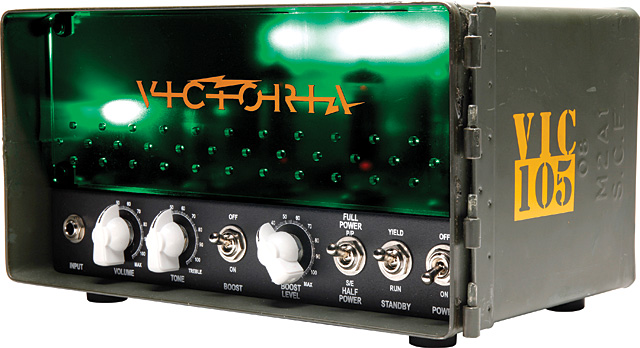 In the 1990s, Mark Baier put himself on the map making quality reproductions of choice ’50s tweed-amp circuits. For the last decade, Baier has broadened his amp line with models that are not reproductions, but the product of his own fertile imagination.

His latest is the VIC 105. A variable-/low-watt amp housed in a 50-caliber ammo box, it has a cool Plexiglas front panel/faceplate with an input, Volume and Tone controls, a Boost switch, a Boost Level control (which increases power-stage gain while decreasing negative feedback), and switches for Half-Power (which switches off one of the power tubes and runs the amp in pure single-ended mode), Standby, and Power. Tubes include a single 12AX7, a pair of EL84s, and an EZ81 rectifier tube. Amazingly, phase-inversion is handled by the EL84s in what Baier calls a “self-splitting output stage inverter” that uses the dual power tubes in single-ended fashion. In effect, one power tube drives the other.

The back panel has an IEC connector, fuse holder, and speaker outputs for 4- and 8-ohm loads. Victoria was kind enough to include a speaker cable with the amp.

Using a Fender Telecaster and 1×12″ cab, we dialed in a clean tone on the 105. Setting the amp on full-power mode and engaging the Boost function, the Vic stayed clean until the halfway point, where it became more responsive while giving a very nice “clean with just a bit of dirt” tone.

Activating the Half-Power switch made for the perfect jump-blues tone – funky and ready to distort with hard playing, yet clean with a softer touch. Cranking up the Volume, the amp got dirtier but cleaned up consistently when the guitar’s Volume was rolled back.

Activating the Boost function, the amp turns into a rock machine, especially when paired with a humbucker-equipped guitar and a 4×12 cab. Naturally, humbuckers shed some of the “cleanliness,” but their driven tones make the switch worthwhile. With the Tone set at 2 o’clock and the Boost and Volume each at 3 o’clock, the amp does a great job mimicking ZZ Top tones.

Playing through the VIC 105 using various guitars and cabs, the amp was impressive in its ability to produce raw-yet-full tones. Most amps with a “raw” sound have an obvious midrange emphasis, while amps that cover a wide frequency range are not known for their responsiveness. This one is different; even though it has the same power tubes and rectifier as an 18-watt Marshall, it is not the least bit British-sounding. Baier credits the amp’s responsiveness to its simple circuit – based on a vintage PA head – and the self-splitting output stage.

The VIC 105 is a great-sounding plug-and-play/low-watt head. If you are looking for raw, responsive tone with a wide frequency range, few if any amps do it this well. Though happiest when paired with a guitar bearing single-coil pickups, the VIC 105 works well with other guitars. And it’s built into its own road case! –