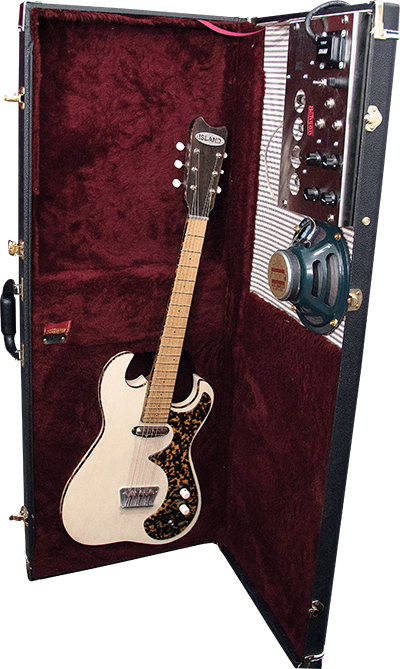 A half-century ago, before Marshalls were stacked and ’Bursts dangled menacingly below hips, the marketing of guitars and amps targeted the teenage garage-band musician. Strapped for cash but looking to rock out, American youth turned to their parents’ Sears catalogs for the latest offerings.

One of the quirkiest offerings of the time was a Silvertone/Danelectro concept that paired a short-scale guitar with a tube amp and speaker built right into the guitar’s case. Alas, the all-in-one combo was short-lived, a victim of changing fashions and musical tastes. Few examples survive, particularly of the amp/case, which was made from cheap material that self-destructed (along with so many well-intentioned garage bands).

But like the receding surf on a California beach, the dream lingered on for luthier Nic Delisle, whose flagship Island Carney model is a close cousin of the Harmony H44 Stratatone played by the likes of Junior Watson, Marc Ribot, and Tom Waits. Delisle teamed up with amp-builder Chris Benson to resurrect the amp-in-case concept, pairing his Carney with Benson’s high-quality Drifter tube amp mounted inside the guitar’s case.

The result oozes retro cool, from the single MoJo Pickups lipstick pickup on the 23.5″ scale Carney to the hand-painted labeling on the amp chassis mounted inside the case.

The amp is modeled on the mid-’60s Silvertone 1457, a 6V6-driven 5-watter with an 8″ Jensen speaker, a tube rectifier, and two preamp tubes for tone and tremolo. The point-to-point wiring is complemented by Mercury Magnetics transformers and Groove Tube valves, and there are controls for tone, volume, and the speed and intensity of the deep and warbly tremolo driven by one of the two 12AX7 preamp tubes.

The amp is loud for a mere 5 watts and has a surprising amount of headroom before overdriving to a nice crunch at top gain. The nature of this retro beast leads to some inherent quirks. For example, because nearly all of the amplifier’s weight is in the upright part of the case, Delisle incorporated a latch similar to that on a car hood to keep the case open when upright and in play mode.

The Island Carney is great fun to play and the craftsmanship is first-rate – it’s an honest tribute to the Silvertone it’s modeled after, both visually and tonally. Everything about the construction is clean, right down to the celluloid binding and pickguard. It sports an aluminum nut, open-back Waverly tuners, and a single-piece solid body made from Western red cedar. The black staining on the back of the guitar is a nod to the reverse burst found on those original Silvertones and Danos. The neck is an innovative bolt-on/through-neck hybrid, extending past the bridge area and allowing the handmade CJ Tooling bridge to bolt through the neck and fasten into an insert in the body.

The cedar and poplar, combined with the guitar’s short scale and lipstick pickup, make for a light instrument – an important consideration when it’s packed away with amp components inside a standard-size rectangular guitar case. The case itself is surprisingly light, too – less than 20 pounds – but a tad front-heavy with the amp chassis located near the tuner end of the guitar. And unlike its chipboard predecessors, the case boasts top-notch materials.

It’s worth noting that the Island Carney can stand out on its own, too, when plugged into much bigger and bolder amps, and it greatly appreciates a healthy dose of reverb – something the case amp does not have (though there is plenty of room in the case for a couple pedals).

The original ’60s Silvertone amp-in-case combos aimed at cash-strapped teens were priced cheap, but also built that way. Delisle’s redux offers substantially superior craftsmanship and materials that take the concept beyond the reach of the modern student or busker, most of whom wouldn’t likely appreciate it anyway. Of course, this “cool factor” comes with a commensurate price tag, of course. Then again, it also features built-to-order craftsmanship; a wide choice of materials, pickups, and finishes; and customer service that its mail-order grandpa couldn’t have possibly delivered.