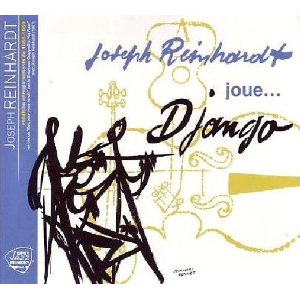 The brilliance of Joseph Reinhardt’s compositions and guitarwork was eclipsed by the star power of his brother, Django. It was only after Django’s death in 1953 that Joseph stepped into the spotlight. With his brother’s passing, Joseph put away his guitar in mourning until a group of French jazz fans arranged the recording session re-released on this CD. The original 1959 10” LP Joseph Reinhardt Joue Django is one of the great rarities of Gypsy jazz.

Joseph’s guitar is backed by French violinist Pierre Ramonet, bassist Pierre Sim, and Gypsy guitarists Jean Maille and Paul Mayer, as well as Joseph and Django’s brother-in-law, Savé Englebert-Racine Schumacher, on one track. Styled like the original Quintette, the band’s acoustic sound was a throwback to the ’30s. Yet Joseph proved on these eight tracks what a soloist the world had been missing in the shadows of Django. He was not a virtuoso like his brother, yet had a signature all his own. He unreels jazzy lines, often with a more Romany air to them, hot jazz at times joyous, at others with a deep Gypsy melancholy. Joseph also showed his hand as composer in the tracks “Bric-à-brac” and “Triste Mélodie.” He had earlier penned the song “Mélodie au crépuscule,” a nighttime reverie long attributed to Django himself. These new tracks continued in that vein, with minor-key moodiness and surprising melodic lines, all capped by Joseph and Pierre Ramonet’s stylish solos.

This collection adds the two-song EP soundtrack to the film Mon Pôte le Gitan with Joseph’s jam, “Manouche,” as well as vocalist Jacques Verières’ tribute to Django in the title song. Finally, there’s a near-lost cut from Joseph’s 1947 collaboration with Grappelli.

This CD goes a long way toward reviving the renown of Joseph Reinhardt – and establishing his name in his own right, out from behind the shadow of his brother.

This article originally appeared in VG’s Nov. ’10 issue. All copyrights are by the author and Vintage Guitar magazine. Unauthorized replication or use is strictly prohibited.