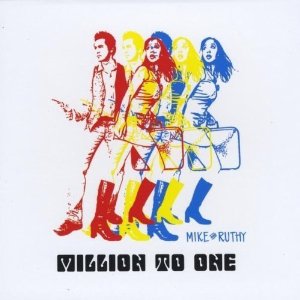 Michael Merenda and Ruth Ungar formed The Mammals early this decade, and in 2008 put the band on hiatus so members could pursue other projects. For Michael and Ruth, that side project is Mike + Ruthy.

How does Mike + Ruthy’s music differ from The Mammals? First, it’s a more-modern-sounding amalgamation, leaving banjos and fiddles for electric and acoustic guitars, and adopting an energy and twangy aesthetic that is at times reminiscent of another husband/wife duo, The Kennedys.

All 12 tunes on Million to One are co-written originals. Some, such as “Be The Boss,” have a primitive rock-and-roll vibe with pentatonic riffs predominating. The title tune features a surf-rock beat coupled with folk-rock vocal harmonies. The resulting pop confection has the texture of Rocky Road – smooth and sweet but with enough nuts and chocolate chunks to give the music backbone. The last song, “Summer Sun,” is the most Mammals-like, but still has a modern/less-acoustic feel.

While still “roots” music, Mike + Ruthy’s Million to One reveals another aspect of Americana – moving from the 1930s and ’40s to a late ’50s and ’60s folk-rock style that had such a huge influence on everything that followed.