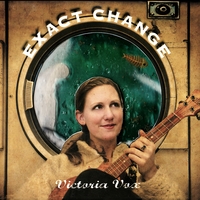 When one first hears an artist and album undeniably unique and idiosyncratic, they’re often reduced to describing it as a marriage of known quantities. So once again, here goes; think of Victoria Vox’s Exact Change as a cross between Edith Piaf and Lucinda Lewis, with maybe some of R. Crumb’s Cheap Suit Serenaders on top.

All of which is to say this is one fun, funky album.

Vox is the ukulele-wielding composer of these tunes that range from hokum jazz to Parisian love – and torch – songs to gritty and grimy roots rock. Combined, the album’s a jewel.

Vox’s songs are catchy and clever, backed by hook-laden melodies. With her uke supplemented on various tracks by banjo, sax, piano, accordion, and the electric guitars of Mike Tarantino and Aaron Keim, the ensemble is as stylish as the songs.

Which brings us to the packaging. The CD comes in what can only be describes as the world’s smallest washing machine; the front cover includes a plastic-encapsulated coin-op washer, complete with floating fish. It has to be seen to be believed.

With funding thanks to donations from her widespread fan base, this is indie recording at its best.