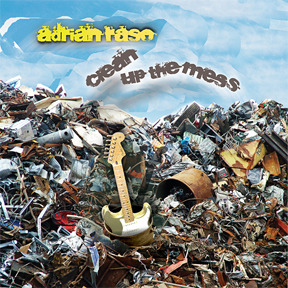 Adrian Raso understands that, just as a guitar solo is not just a place-holder between lyric lines, an instrumental is not just a bunch of notes that sound good together.

Guitarists may have an extra dimension of appreciation for Raso’s music, but unlike a lot of speed merchants, he doesn’t waste time with acrobatics that mean nothing to anyone but other players. Bits of Jeff Beck surface in “Swept Away” and in the uptempo boogie of “Crossin’ The Line,” Mark Knopfler in the cool blues of “The Question Of

Blue?,” and in “P.J. Shuffle” he lays out choppy, steely phrases out of Stevie Ray Vaughan’s book, being particularly creative on turnarounds. But “Crossin’ The Line” also has Les Paul’s signature on it, “Swept Away” invokes Jimi Hendrix and his affection for Django Reinhardt is all over the place. But, deconstruction aside, Raso is neither a wannabe nor copycat.

Clean Up The Mess plays as if someone had asked, “Adrian, why do you play the guitar?” with each cut being an expansion on the answer.