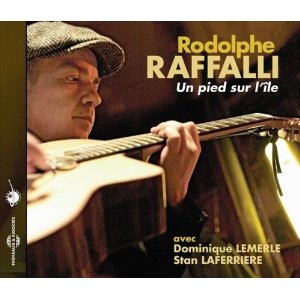 A hero of today’s Parisian jazz guitar scene, Rodolphe Raffalli is renowned for his virtuosity and glorious melodic sense. It’s a rare blend; he’s a true master who can still keep his music grounded and simple at the best of times.

For years before the current popular renaissance, Raffalli led a now-fabled Gypsy jazz band in the City of Lights. But in recent times he has released a series of CDs with a more intimate backing band, putting his arranging and playing in the spotlight. His two discs of Georges Brassens’ melodies are tours de force.

The title of this new album translates as “One Foot on the Island” – that isle being Corsica, part of Raffalli’s French-Italian-Corsican heritage. The tunes here range from swing cuts to waltzes to ballads. Combined, it’s a rich legacy, and Raffalli brings it all to life in a new way.

The Gypsy jazz romp “Corsaswing” opens the set, displaying the fiery lines of which he’s famed. On the Corsican ballads like “La Complainte Corse,” his Selmer-style acoustic guitar sings with a living voice.

Among the most fascinating pieces here – both for the guitar playing and the odd transposition – are Raffalli’s “bebop waltzes,” taking inspiration from the Parisian Romany maestro Pierre “Baro” Ferret. Raffalli plays the jewel “La vieille guitar” as if he’s jamming alongside Charlie Parker and Dizzy Gillespie, crafting a masterpiece both old and new.

Coal Men – Beauty of the Moment