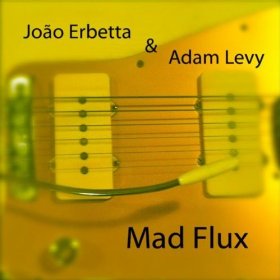 A glimpse at João Erbetta’s résumé brings to mind Harry Belafonte’s tongue-in-cheek introduction of Carlos Santana at the 2013 Kennedy Center Honors, begging for immigration reform because the Mexican native had squelched his hopes for a calypso revival. Since ’06, when he moved to the States from Brazil (where he was a member of the hard-rocking Los Pirata), Erbetta has cranked out solo and group CDs. And while he hasn’t been honored at the Kennedy Center (yet), he’s performed there as well as at the White House.

His latest one-two punch consists of a second offering from L.A.’s Panamericans! and a guitar-duo set with Adam Levy. This time around, the Panamericans! are drummer Pete Curry (bassist with Los Straitjackets, lead guitarist with the Halibuts), bassist Rob Douglas (Chuck Proﬁtt, Mike Stinson), and guest saxophonist Ron Dziubla (now a full-timer), with guitarist Eddie Angel sitting this one out. Levy’s guitar solos will be familiar to anyone who’s heard Tracy Chapman’s “Give Me One Reason” or Norah Jones’ “Come Away with Me” – in other words, every person on Earth. He has also recorded with Amos Lee and Ani DiFranco, among others.

Erbetta’s style somehow juxtaposes and blends jazz, Latin, surf, spaghetti Western, and easy listening – like a contemporary Al Caiola. His and Levy’s different backgrounds help rather than hinder their interplay, both as self-contained duo and co-writers. The main thing they have in common is respect for melody. So originals like the uncategorizable, old-is-new-again “Sad Texan” sit comfortably alongside a slowed-down rendition of mambo king Perez Prado’s 1958 chart-topper “Patricia.”

Meanwhile, the Panamericans!dip further into the Crescent City, albeit with a surf-combo edge to instrumental arrangements of Allen Toussaint’s and Earl King’s R&B and Sidney Bechet’s and King Oliver’s early jazz. If Erbetta is proliﬁc, his compadres are equally versatile. It’s mind boggling to realize that the multi-instrumentalist (and engineer) playing drums à la Sam Butera & the Witnesses got his start with the Chocolate Watchband.