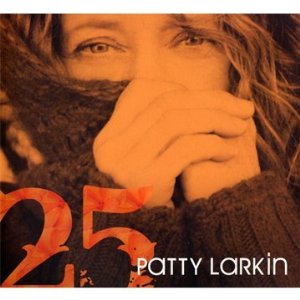 When faced with the task of creating a retrospective album, Patty Larkin took a novel approach. Instead of creating a “best of” album, she re-recorded her favorite 25 love songs while enlisting 25 of her favorite musicians as collaborators.

Unlike many songwriters, whose guitar chops are mediocre at best, Larkin ranks as a supremely good fingerstyle player. She attended Berklee College of Music to study jazz guitar, and 25 serves as an excellent showcase for her skills. Every cut features her on acoustic guitar as principal backing instrument. 25 also showcases Larkin’s solo vocals. Though a collection of duets, all of the cuts start with Larkin as a solo act – just lead vocals and guitar – no overdubs or other studio additions. This is a radical departure, as many of her studio albums employ complex orchestrations and studio effects.

Although every selection on 25 is a duet by definition, most of the cuts are more 75 percent Larkin and 25 percent guest, rather than 50/50. Instead of a partnership, this music has a leader and a follower. On one of the few cuts where another musician plays guitar, Italian flatpicking guitarist Beppe Gambetta’s guitar parts are mixed well into the background.

In the end, 25 proves that Patti Larkin is one heck of a great solo act.