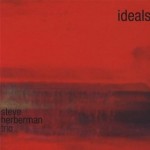 Herberman is known as an educator/player, and with each release, his skills become more and more evident. He plays a seven-string guitar and mixes jazz standards with originals such that every song sounds like his own.
Herberman is as at home with atmospheric boppers like “This is New” as he is with introspective ballads like the title cut. The former offers a full menu of chops, mixing chords with single-lines and everything in-between. It never becomes clichéd, and Herberman’s use of chromatics adds an element that takes you by surprise and keeps things moving. The original “She’s For Me” is another chance to take in the chops; while playing with incredible soul and wit, Herberman recalls the history of jazz guitar in an imaginative, leisurely-paced swinger.

The effort here is essentially a trio record, and Herberman is generous with the time; Tom Baldwin’s bass adds admirably to the songs, and drummer Mark Ferber works very rhythmically with Herberman.

Herberman isn’t a household name among jazz fans like some of his generation have become, but his playing and compositional skills should make him one.

This article originally appeared in VG’s Jun. ’09 issue.  All copyrights are by the author and Vintage Guitar magazine.  Unauthorized replication or use is strictly prohibited

The Anthony Wilson Trio – Our Gang