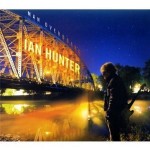 Ian Hunter is on a roll. His 2007 disc, Shrunken Heads, was an amazing set of music that put the one-time Mott the Hoople head man back on the list of great songwriter/singers. Man Overboard continues that climb. And given that he took six years between his two previous album, it’s nice to see Hunter accelerate his creative process, especially when the quality doesn’t suffer.

Songs like “The Great Escape” and the anthemic “River of Tears” carry a moral, while whimsical tunes like “Girl From the Office” relate to anyone who has worked with the fairer sex. “These Feelings” and “Flowers” are love songs of raw emotion, and all tracks are delivered via Hunter’s craggy voice and a band that sounds like a rock band ought to sound.

Among the guitarists are Jack Petruzzelli and James Mastro. Producer Andy York (John Mellencamp) also straps on the six-string, and together they deliver tasteful guitar in layers that never intrude on Hunter’s lyrics or voice. Acoustics supply background, while the slide parts are often gracefully reminiscent of George Harrison’s. A close listen reveals a lot of guitar work that never gets in the way, but always adds to the songs.

Hunter’s character and grace grows as he ages, lending a valuable lesson for rockers everywhere.

Duke Levine – Beneath the Blue

Soulive – Turn It Out