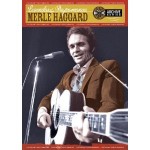 Merle Haggard rightly considers himself a musician as much as, if not more than, a singer, songwriter, or performer. And he has always been a member of the outstanding collection of talented musicians who have worked with him as the Strangers.

Primarily a guitar player and prompted by his admiration for Bob Wills, Haggard took up the fiddle long after he was an established star. According to guitarist Redd Volkaert, he may have driven the band crazy practicing while walking up and down the aisle of the tour bus while they were trying to sleep, but he made himself – willed himself – into becoming a legitimate fiddler.

As a player and composer, Haggard employs a sense of melody and affinity for unusual, compelling chord changes that Volkaert, to name one among many who should know, praises to the heights.

It’s that sense of musicianship, and the interplay between Haggard and his crackerjack players (as on “Ramblin’ Fever”) that gives this collection of live performances an extra dimension. The songs – some of his biggest and best presented chronologically from 1968’s “Branded Man” to his 1983 take on “San Antonio Rose” – are among country music’s best. It’s a shame the package doesn’t include band credits, but the sharp-eyed will spot the usual suspects – Roy Nichols, Norm Hamlet, mandolinist Tiny Moore, and another Texas Playboy or two among the bunch.

The equation is obvious; Merle Haggard plus great band plus big bag of “Hag” hits equals one hugely enjoyable DVD. Extras include an interview of Merle with former wife and singing partner, Leona Williams, and footage of his 1994 induction into the Country Music Hall Of Fame.

This article originally appeared in VG’s Feb. ’09 issue.  All copyrights are by the author and Vintage Guitar magazine.  Unauthorized replication or use is strictly prohibited.

Ronnie Earl and the Broadcasters