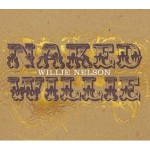 The forced, intrusive background vocals on the “definitive” versions of “Funny How Time Slips Away” or “Crazy” (from The Essential Willie Nelson) are argument enough in favor of this project.

The songs on Naked Willie were recorded between 1966 and 1970, and though Nelson was a successful, respected songwriter by that time, his own records had yet to take off in terms of sales. So his recording sessions were in the hands of some expert, but often very doctrinaire, producers. Only in the mid ’70s, with albums like Red Headed Stranger, did Nelson began to evolve into the lovable hophead cowboy pixie whose music has become part of the American pop fabric.

So the idea to strip down some of his pre-“outlaw” material and expose the work of session musicians like Jerry Reed and Chet Atkins was a great one. Unfortunately, because Reed, Atkins, et al were part of the support team, there are no examples of great hitherto obscure licks.

There are times when the “treatment” given these tracks could go even further. For instance, no one would miss the clunky drums on “Sunday Morning Coming Down.” And while the mariachi horns on “Following Me Around” sound fairly organic, the strings and background vocals on “The Party’s Over”… not so much.  That song, by the way, is not the Jules Styne/Betty Comden/Adolph Green classic, and it’s also not one of Willie’s finest.

That’s the hitch in the plan – there aren’t enough of Nelson’s better and/or more familiar tunes here. So if there’s a Volume Two in the works, let’s hope they make them first priority.

This article originally appeared in VG’s May. ’09 issue.  All copyrights are by the author and Vintage Guitar magazine.  Unauthorized replication or use is strictly prohibited.