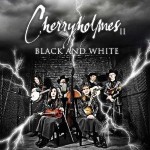 From mandolin playing mom, Sandy, and bass player pop, Jere, to 14-year-old Molly, the six-person Cherryholmes family band picks and sings like they were born to it. Was it the air or water in their native Arizona? Is it something Jere hides in that long white beard? Just what is the secret? Practice and devotion most likely, since every Cherryholmes plays, sings, and writes as though their hearts are completely in it. Even some of their names – Cia Cherryholmes, Sandy Cherryholmes – have a whimsical poesy.

The showstoppers on Black And White come from banjoist Cia and guitarist Skip, who only gets one lead vocal but makes it count, sounding like a bluegrass Rick Nelson while singing Robert Gateley’s lovely minor waltz, “Heat of The Morning.” Molly and B.J. add beautiful twin fiddle work, shining with more of the same on two of the disc’s three instrumentals and bringing sting to Cia’s uptempo but melancholy “I Don’t Know.” It can’t be easy to stand out among such a strong bunch, but Cia – writer, player and singer – manages, her high clear voice poignant and moving on the original “You Don’t Know What Love Is.” And her rendition of Sonya Isaacs’ title song is heart-stopping. Jere says bluegrass doesn’t need to change to survive, just to have new life breathed into it. Well, here’s a healthy dose.

This article originally appeared in VG’s Nov. ’08 issue.  All copyrights are by the author and Vintage Guitar magazine.  Unauthorized replication or use is strictly prohibited.
The Guide