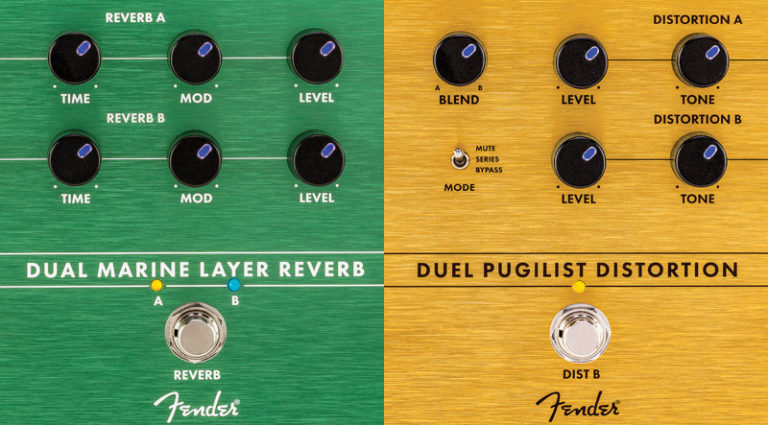 Fender launched its Pugilist Distortion and Marine Layer Reverb in 2018, after VP of Innovation Stan Cotey – who’d previously helped design signature amps with Eric Clapton, Joe Bonamassa, and The Edge – developed a series of new-from-scratch pedals. Updated twists on each, the Duel Pugilist Distortion and Dual Marine Layer Reverboffer an extended array of options and combinations.

The all-analog Duel Pugilist provides two independent distortion circuits with series and parallel options and three operating modes; Series stacks the two distortions like two separate pedals. Bypass combines two different distortion sounds or a clean tone with a distorted one. Mute dials in a base tone that can be layered with an additional distortion on top for added depth and richness.

Each channel has its own array of tone controls. To further refine the sounds, the pedal also features a two-band master-shelving EQ. The result is a knockout punch.

The Dual Marine Layer Reverb also has two presets/channels with three algorithm modes that let you mix and match to craft soundscapes – Hall, Room, and Shimmer. And it has an analog dry-signal path.

There are also Mod(ulation) controls that provide lush choral effects for each channel, and a crazy-cool Sustain with footswitch creates far-out dreamscapes of otherworldly reverb. And again, each channel comes with its own set of controls.

Both boxes are housed in stylish anodized aluminum. And those control knobs have LED lights that can be switched off.