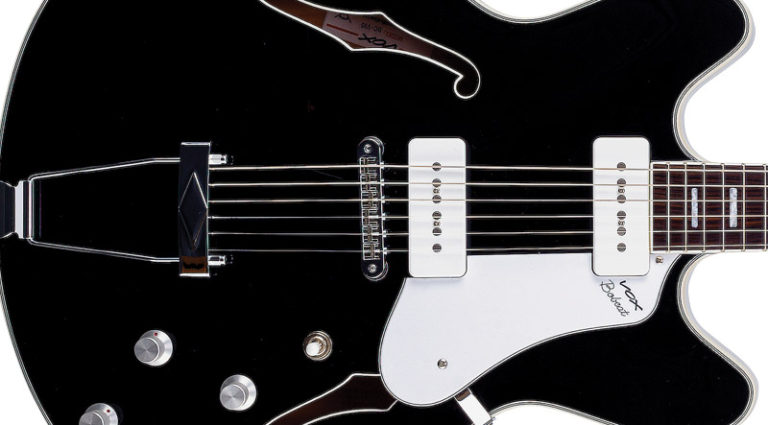 In the Swinging ’60s, Vox guitars were all the rage, particularly among British and European players. Though stylish and visually innovative, the Italian-made guitars were also inconsistent, with anemic pickups and structural flaws such as weak tailpieces, faulty wiring, and weighty headstocks.

Thankfully, Vox guitars of the 21st century suffer none of those issues, as exemplified by the reissue Bobcat V90, which retains much of the flavor of the original semi-hollow Bobcat and Lynx models.

Constructed of maple with a mahogany neck, Indonesian ebony fretboard, 25″ scale, and a wide, weight-relieved center block, the Bobcat V90 weighs in at a shade over six pounds, making it easy on the back and shoulders. Grover open-back tuners do the job with aplomb and are, of course, a vast improvement over Voxes of yore, which were notorious for tuning instability.

The Bobcat V90 is also perfectly balanced – another big improvement over past models. But where this guitar really shines is in its tones. The proprietary V90 pickups may look garden-variety, but that’s not the case; these have much more high-end chime, sparkle, and spank than other P-90s, giving the player more options when manipulated by the Volume and Tone knobs. Cranked to 10 through a Class A tube amp, the bridge pickup gets a tad bright, but with Volume and Tone rolled down to 8, mellows. Adding overdrive and delay brought gorgeous, singing tone reminiscent of Eric Johnson and Gary Moore. This is a versatile instrument.

Some may be put off by the price, but the included hardshell case helps make the V90 a handsome, worthwhile choice for a quality semi-hollow.