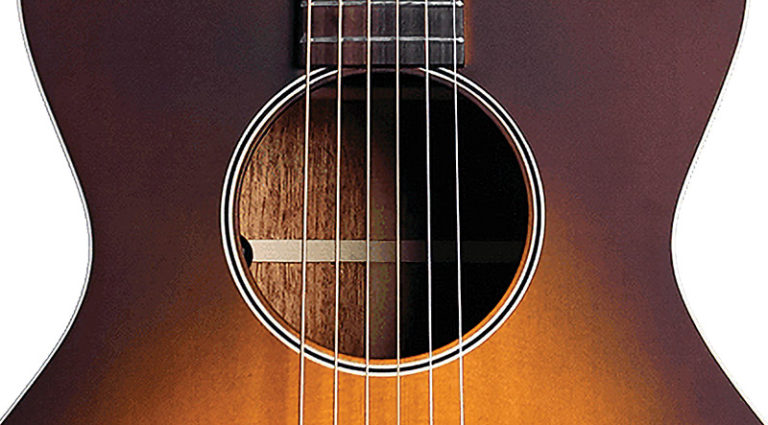 B&G Guitars are made in Tel Aviv by a talented shop that translates the best traits of traditional guitars into high-quality instruments for today’s player. With the Caletta, their aim was to merge a Stella and a Martin – that is, combine the compact size, playability, and tone of guitars played by early blues fingerstylists (think Blind Lemon Jefferson or Charley Patton) with the warmth and richness of a folky D-28.

The two most immediately striking characteristics of the Caletta are its super-light weight and the big boom of its low-to-mid response. Both warrant a double-take. At about 3.5 pounds, the guitar is so light it’s a surprise each time you pluck it off the stand. And for a guitar of this size – somewhere between a parlor and a 000 – such volume and low-end resonance is counterintuitive if not downright confounding.

It’s a fool’s errand (but a luthier’s job) to suss how exactly that could be accomplished. Factors include the old-growth Sitka top (just 2mm thick), shaves in the X-bracing, and the tight-grain mahogany back and sides (also available in Indian rosewood). The soft-V neck, with its slotted headstock, is a single piece of mahogany as well, meeting the body at the 12th fret with a joint set deep into the body, enhancing stability and resonance.

The playability of that neck is Caletta’s third pleasant surprise. Our test guitar arrived with a great setup (from Israel, mind you). Low action across the neck from the 1.68″ nut to the 12th fret made it a dream for fingerstyle. The ease of play is matched by responsiveness; it’s forgiving yet articulate. There is a softness under the hands that calls you back, abetted by the 24.75″ scale length, which lessens tension.

The highest compliment we can pay to the B&G-built piezo pickup system is that the Caletta’s tone through a good acoustic amp maintains all the character, balance, big lows, and strong highs that are there unplugged. A single control – a small thumbwheel for Volume – sits nearly hidden at the top of the soundhole (we played for half an hour before realizing the guitar was wired).

Calettas have a satin nitrocellulose finish and ship in a high-end case. Our test model was in Tobacco Sunburst with cream binding – warm, dark and strong, much like the tone that awaits.