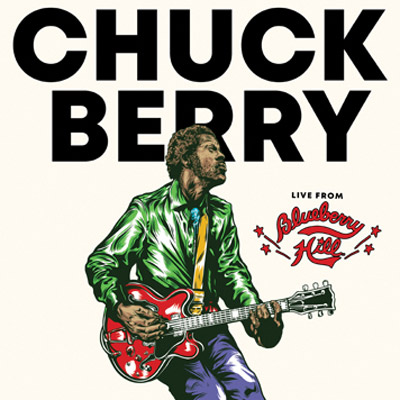 If you saw a Chuck Berry performance during the final 20 years of his life, it was likely at a club called Blueberry Hill, in his native St. Louis, where he played more than 200 consecutive monthly shows beginning in 1997. Those intimate gigs featured rock and roll’s founding father running through familiar hits with his iconic ES-355, occasionally with mixed results. But not on Live from Blueberry Hill.

A satisfying romp culled from performances in 2005-’06, when Berry was nearing his 80th birthday, it includes iconic songs, signature guitar intros, riffs, and fills – from the opening “Roll Over Beethoven” to “Rock and Roll Music” and the obvious closer, “Johnny B. Goode.” Extended solo workouts are in short supply, but two moments where Berry stretches out modestly come on a pastiche of “Carol”/“Little Queenie” and “Bio,” the title track from his 1973 Chess LP.

This album’s high energy level makes it easy to overlook its thin duration of under 35 minutes, and Live at Blueberry Hill can’t be called essential. But it’s a joyous snapshot of rock’s greatest poet in his twilight, still delivering memorable moments from an unparalleled catalog.