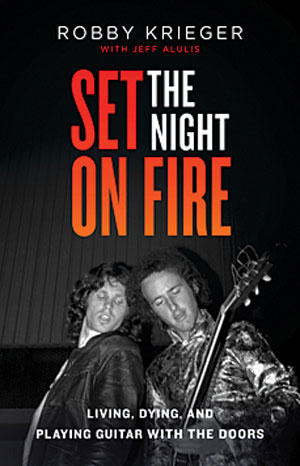 The mellow axe-man with the self-described “worst hair in rock and roll” aims to correct those earlier efforts with a sly, self-deprecating sense of humor when he says Manzarek’s book was filled with inaccuracies and Densmore’s, while “more reliable,” had its own errors and “editorialized.” It also examines the convoluted 2003 lawsuit filed by Densmore and Morrison’s estate against Krieger and Manzarek for touring under the band’s name.

Many guitar stories are included. As a fan of blues, folk, flamenco, and jug-band music, Krieger was an “acoustic purist” before his Doors audition and the required move to electric guitar. After seeing Chuck Berry, he wanted a Gibson ES-335, but bought a cheaper SG Special instead, on which he wrote early Doors classics before it was stolen.
“To other people, an object itself may be valuable,” he says. “To me, its value lies in what it inspired.” A great quote – and profound philosophy.