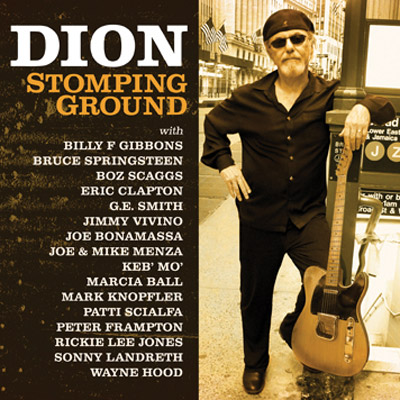 Through more than six decades, Dion DiMucci has traversed doo-wop, folk, folk-rock, gospel and, in recent years, blues-flavored guitar music – a passion rooted in his discovering Robert Johnson in the mid ’60s.

Stomping Ground is a continuation of his 2020 collaborative album Blues with Friends. Its 15 songs are mostly bluesy originals by DiMucci and Mike Aquilina, joined by heavy-hitting guest singers and guitarists.

On “Hey Diddle Diddle,” G.E. Smith’s screaming riffs and solos energize Dion’s vocal. Bruce Springsteen’s acoustic guitar and harmonica on “Angel in the Alleyways” are fleshed-out by Patti Scialfa’s harmonies. The Chuck-Berryesque “I’ve Got to Get to You” is a Dion duet with Boz Scaggs that features the screaming father-son Les Pauls of Joe and Mike Menza. Wayne Hood’s guitar adds incandescent passion to “I’ve Been Watching,” a duet with Rickie Lee Jones.