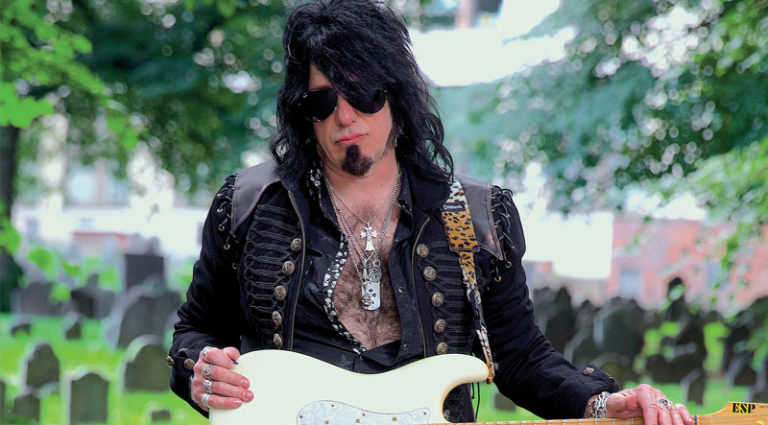 Some musicians use grandiose nicknames like “the doctor” (Dr. John) or “the professor” (Rush’s Neil Peart) – but Boston shredder Joe Stump actually is a professor at the Berklee College of Music. In his educational role, Stump teaches guitar students how to speed-pick like metal’s greatest masters.

He also demonstrates his chops on the solo effort Diabolical Ferocity, a roller-coaster ride of crunchy riffs, diminished sweeps, and shredding as fast as the devil. Syllabus in hand, we asked Prof. Stump for the latest dirt.

Absolutely, 100 percent. I still love all those guys and listen to them on a regular basis to this day, along with Michael Schenker and Uli Jon Roth. As for Blackmore, there are so many things that I love – his phrasing, note choices, inflection, and use of exotic scales like Hungarian minor, Byzantine, and Spanish Phrygian. Also, the power and aggressiveness in his tone and hands, as well as that take-no-prisoners approach. I often tell my Berklee students they can learn everything they need to know about hard rock and metal from Ritchie.

What’s a good example of how you use scales and modes in a song?
The melody in “Sneak Attack” is a very cool combination of harmonic, Hungarian, natural, and melodic minor scales. In the Blackmore tradition, the solo section starts with minor runs, goes into a balls-out rock thing, and then back to evil, dark Phrygian and diminished action. In my eyes, Blackmore wrote the book when it comes to this kind of music.

You pick with incredible speed.

When it comes to playing fast, that technical guitar stuff is great and impressive – but it’s only cool when showcased inside music that’s enjoyable to listen to. That’s my goal.

Your Gary Moore homage, “Forever Moore,” lets you slow down and stretch out.

I love all eras of Moore’s playing and own just about everything he’s ever done. To me, Gary represents all that is great about guitar; he plays with power, tone, and a massive amount of intensity. When recording “Forever Moore,” I tried to channel some of his power and vibe, all the time keeping it as honest as possible. A friend of mine sent the track to Gary’s son, Jack, who replied that it was beautiful, which made me quite happy.

Do you have scalloped fretboards on all your ESP and Fender solidbodies?
Yes, and they make it much easier to get under the note for bending, vibrato, and expression. On this record, I used a variety of guitars including one of my ESP signature models, a Fender Yngwie signature Strat from 2003 with DiMarzios, and a couple of the Custom Shop 30th Anniversary Yngwie Strats with ’68 maple-cap necks. I also used a Japan-made Blackmore model with a custom pickguard fitted with hand-wound Munich 77 single-coil pickups. I also use a BSM Spice Box, which is an internal circuit; it’s Bernd Meiser’s take on the late, great Dawk Stillwell’s tone circuit. Dawk was Blackmore’s trusted tech, and I had the pleasure of knowing him for many years.

Which amps and effects did you use on the album?
It’s a combination of a Marshall YJM 100 miked up, with a direct signal from the Boss Waza Tube Amp Expander. The YJM 100 is killer, plus it’s got a 50/100-watt switch. On all the neo-classical tracks, I used the 50-watt setting with either an old gray DOD Overdrive Preamp 250 or the more recent Fender Yngwie Malmsteen Overdrive. On “Forever Moore,” I used the 100-watt setting and a Maxon OD-808 Extreme overdrive. On the heavily Blackmore-induced “The Snake Charmer’s Fate,” it was also the 100-watt setting, along with a GuitarSlinger RB1011 treble booster and an old Boss OC-2 Octave.

Have you ever met Yngwie?
Yes, he did a clinic at Berklee and we hung out beforehand, which was awesome. We were onstage talking and checking out his guitars, Marshalls, and pedalboard. Doing a clinic at Berklee in front of 600 guitar players is a different animal than a gig and, in his book, Relentless, he says it was one of the best clinics he ever did.

How do you balance your work teaching at Berklee, plus a busy solo career and gigs with Alcatrazz?
Things can get quite hectic, between my packed teaching schedule, touring with Alcatrazz, and solo projects. I also have a Deep Purple tribute band called Stormbringer, and a Rainbow tribute called Black Knight’s Castle, both of which play regional shows. Somehow, I manage to keep it all organized – 30 years into my career. I’m lucky to still be eating, breathing, and sleeping guitar. I’ve got that thing in my hands seven-plus hours a day, whether I like it or not. But I wouldn’t want it any other way.