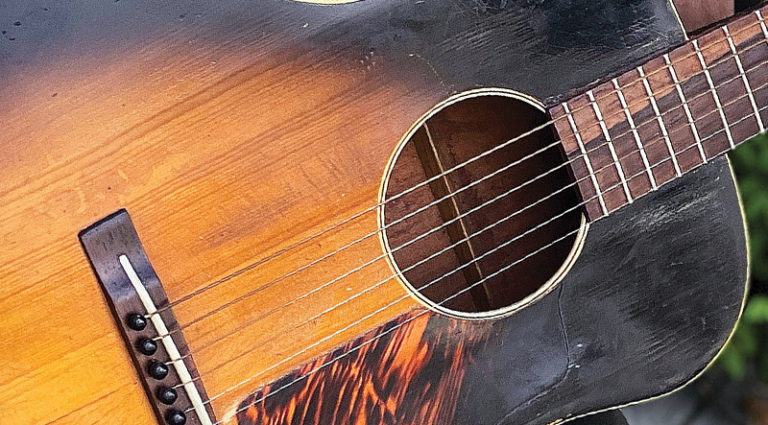 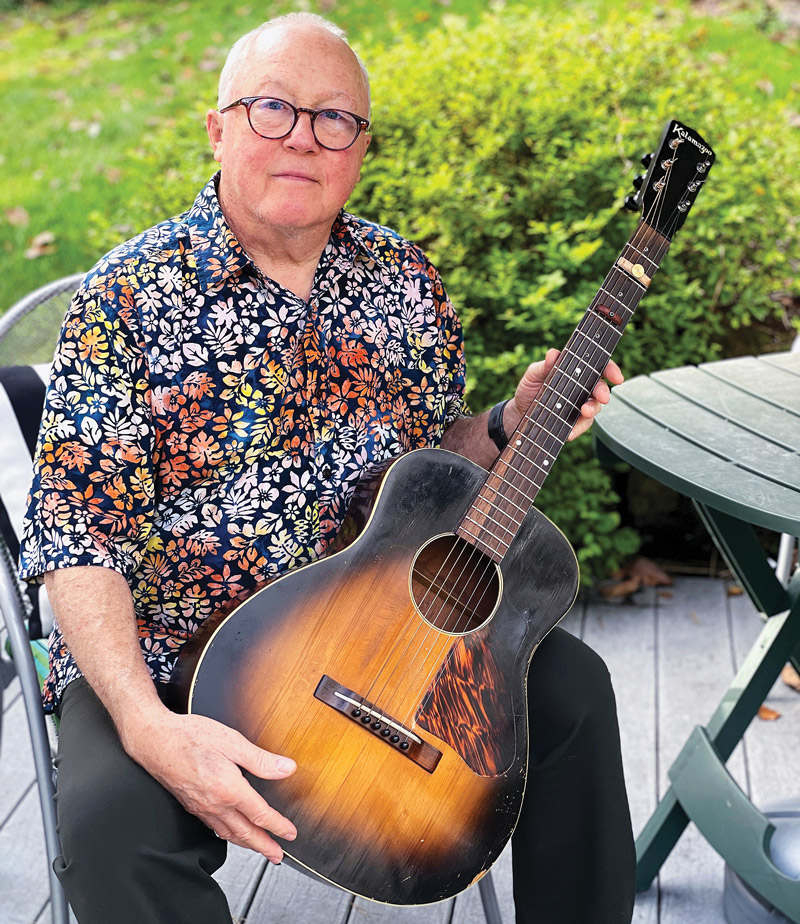 In last month’s “Approved Gear,” VG reviewed the Iris Guitar Company DE-11. If you missed it, I’d suggest you grab the issue and check it out. This month, I’ll take you on a “tour” of the guitar, which I designed with Adam Buchwald, inspired by one of my all-time favorite instruments – a 1937 Kalamazoo KG-11.

The KG-11 has been a favorite since I first played one 20 years ago, after I started to experience shoulder pain from hunching over my Gibson J-35 and other dreadnoughts; also, my right hand would go numb and I’d have to rest after just 15 minutes. A physical therapist convinced me to try something smaller. Almost like magic, the KG-11 came into the shop for sale and, after playing it, I loved it so much I bought two more!

Kalamazoo was Gibson’s budget brand, produced for five years beginning in 1937. They were given the same woods as their Gibson siblings – Honduras mahogany for the back, sides, and neck, Adirondack (“red”) spruce top, Brazilian rosewood fretboard and bridge, and an ebony nut – and the neck, sides, and back were finished in the same dark walnut (sometimes cordovan) lacquer, with a gorgeous dark-sunburst top very much like the J-35 and others. They even had the same fire-stripe pickguard.

The DE-11 wouldn’t exist were it not for Steve Miller, who apprenticed in my shop for two years before scoring a job with Iris, where he told Adam how much he loved my Kalamazoo’s built-in capo. Adam then asked if I’d be interested in helping Iris create a guitar with something similar. I was thrilled, and sent my beloved Kazoo off for study. Here’s how it came about. 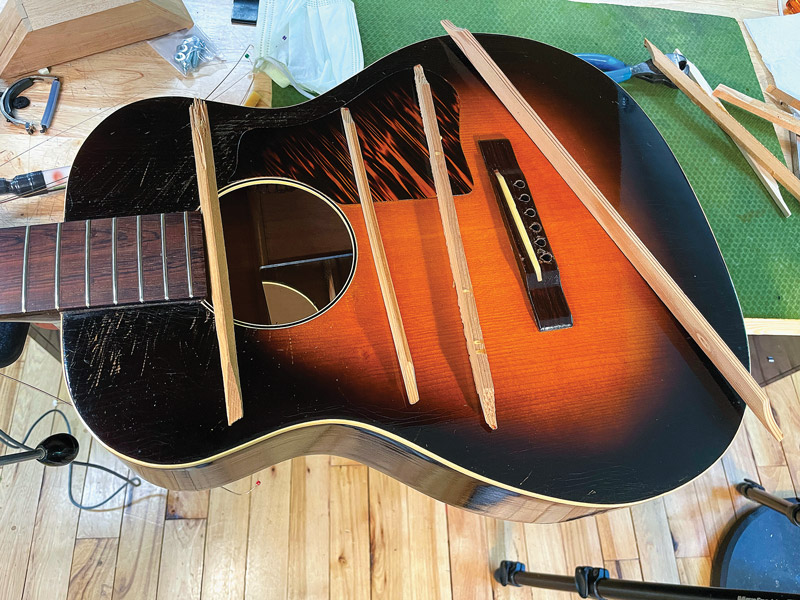 1) Ladder-bracing is a simpler design, but not lower-quality. I situated braces to illustrate the ladder bracing on all Kalamazoos; there’s one spanning the shoulders under the fretboard, two between the sound hole and bridge (with ends closer together on the bass side), and a long one spanning the lower bout. 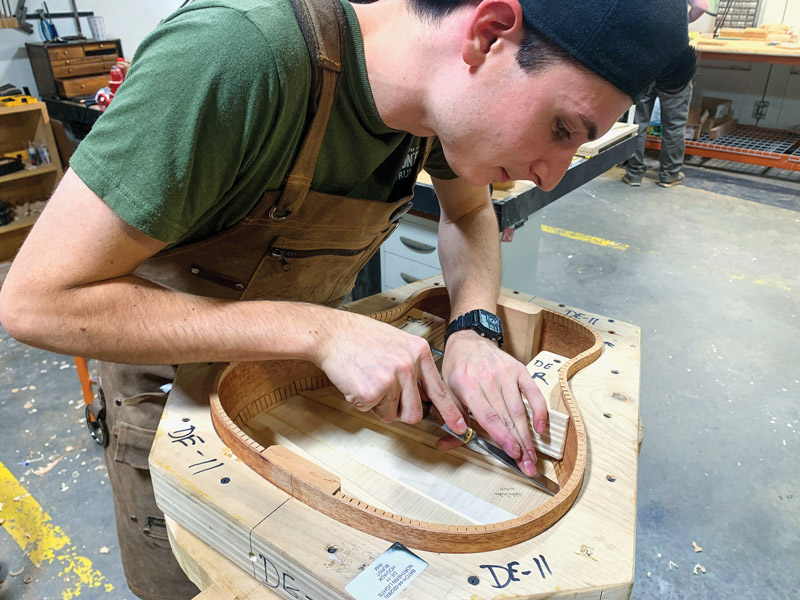 3) The KG-11 was given a simple spruce bridge reinforcement running almost edge to edge on the top. Notice how the bridge-pin holes are split and torn, probably from being drilled without a backboard being placed against the soft spruce. Both of my backup Kazoos were like this and had to be fixed. 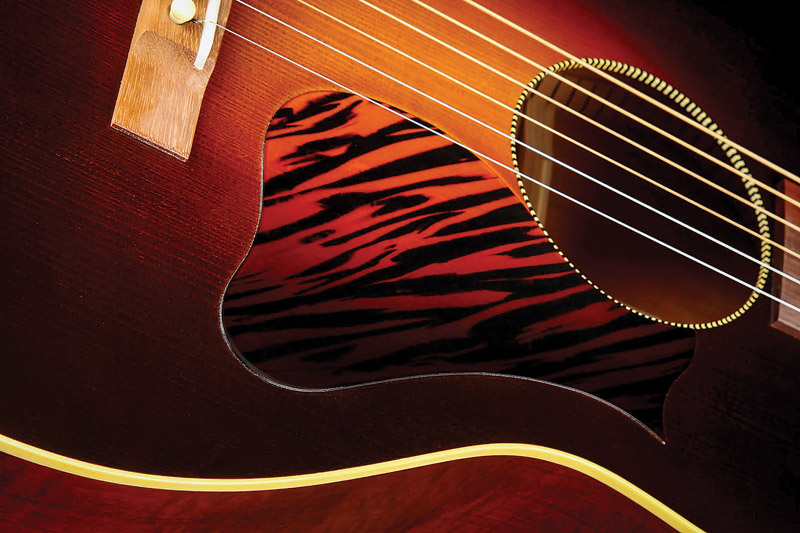 4) Rather than sound hole purfling, binding material (white/black/white or single-ply white) was glued to the inner edge of the sound hole of the KG-11 – another cost-saving measure. Iris surprised me with checkerboard sound hole binding on the DE-11, and I love it. 5) Before getting the KG-11, I’d been thinking of how to design a capo that wasn’t so clunky and in the way of my hand. I also thought about how to make one that fastened to the neck and extended to press on strings a few frets toward the nut. With the DE-11, that became a reality. Some of my contraptions along the way were hilarious, but they worked. 6) Over the course of a year, I made a number of capos from different woods, aluminum, and brass before settling on the version I use today. These are made from a wood called Katalox, and they fasten to the fretboard using a top-mounted thumb screw with a 6-32 machine thread or a round-head 6-32 Torx drive machine screw that rests below the surface of the capo body. Not pictured is a second four-string capo that’s slightly wider, made for going up the neck in tandem with the full-size capo as strings become further apart. 7) Before the DE-11’s fretboard is glued to the neck, the capo screws are mounted from underneath into 6-32 threaded stainless-steel anchors. Small holes allow the screws to reach the anchors at the first seven frets – three, five, and seven have ivoroid dot inlays with the hole through them. 9) My only criticism of the KG-11 is that the tuners are worn – no surprise after more than 80 years. Even when new, they weren’t the best, and now they’re very stiff; some won’t tune to pitch. I’d installed Rickard Cyclone high-ratio tuners on my first KG-11 and the J-35, and they became my favorite, so we used them on the DE-11. They’re the most-accurate tuners I’ve ever used, and they look cool. 10) When it came to the finish, I knew Iris would nail a vintage sunburst. Like some other modern makers, they apply a very thin, satiny finish that I like a lot. It’s close to the wood, which means the guitar sounds more broken-in.