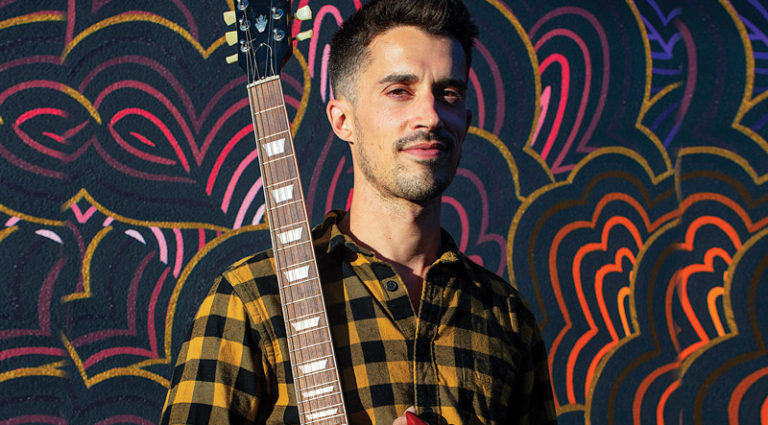 Forget everything you know about slide guitar. Jules Leyhe just upended the genre on Your First Rodeo, an instrumental set that gleefully mixes styles with riveting results. On top of it all, Leyhe’s bluesy slide and leads steal the show with soulful, bluesy figures and fierce explorations. To get the skinny, we caught up with the Bay Area bottlenecker.

When did you first connect with the blues?
My dad turned me onto the blues at a young age, and I saw Buddy Guy, Jerry Lee Lewis, Chuck Berry, Little Richard, and the Rolling Stones all at the tender age of eight. I got a little CD player and headphones shortly after, and was internalizing and loving music. I remember getting the goosebumps listening to Muddy Waters play slide, and trying to sound like him.

There’s a non-traditional mix of heavy blues, Mexican brass, fusion, and psychedelia on the new album.

I’m a huge fan of the Beatles, and I’m especially fond of Sgt. Pepper’s. I read an original review from 1967 and the critic said it was, “Busy, cluttered, hip.” I thought that was badass and wanted to do my own version of that. Between the influence of the Beatles and our incredibly capable Family Jules Band, from Oakland, we wanted to make something fearlessly unique to share with the whole world.

Your harmonized slide on “Taco Truck” and “The Journey” bring to life George Harrison’s indelible slide.

I love George – how could you not? His songwriting style and guitar playing have influenced me tremendously. Harrison was so lyrical and melodic with his slide playing, which is distinct from many blues slide players who play with a different dialect. To me, the record is a series of “micro homages” to my favorite players and harmonized slide guitar parts are a way of tipping my cap to George.

Your solo in “The Planetarium” further pays tribute to Jimi.

Hendrix’s playing is so personal, exquisite, and human all at the same time. It’s not a chops thing, it’s not an Eb-minor pentatonic thing – it’s a heart-and-soul thing. That’s all you’re hearing when you hear Hendrix, and that’s all I want you to hear when you hear me. “Machine Gun,” from Band of Gypsies, is my favorite piece of guitar playing of all-time, so I wanted to set up my own tribute with the first two minutes of “The Planetarium.”

You studied blues at the Berklee College of Music. What did you learn?

Berklee introduced me to one of my biggest heroes and influences in my life – my personal favorite slide guitarist in the entire world, David Tronzo. I studied with him privately for three years and he got me going on the path I’ve been on since school. He trained me like a Kung Fu warrior, through hard work. It was an education I couldn’t have gotten from anyone else.

Your slide tone is ferocious and fat. How do you capture that raw intensity in the studio?
Anytime I’m playing slide, it’s on my Gibson SG ’61 reissue. She barks and is tuned to open E. Crazily enough, all of the guitar sounds on the album were recorded from my Ceriatone Overtone Special 50-watt amp plugged right into a Boss Waza Tube Amp Expander. We never mic’d a guitar amp, and that allowed my producer to have as much control over the sound as possible.

What other gear is on the record?
Ceriatone also makes a Klon clone called the Centura, and I’m using that for high-gain situations – that’s the secret sauce! That pedal is magical; it’s very responsive to one’s touch and excites the harmonics in the tone you’re already working with. Other than that, I love using my Dunlop volume pedal to play dynamically, like “The Journey.” I really like the Hendrix/Trower-inspired Univibe tone I get from this cool pedal called the Mojo Hand, by Luna. I also like to throw in Vertex Effects overdrive pedals to help color and shape the tone.

How did you end up onstage with blues luminaries like Buddy Guy and Jimmie Vaughan?
I’ve known Buddy since I was 16 years old, when he first had me up to jam at one of his concerts. Buddy has been the best to me over the years – kind and generous with the limelight. They say it’s not good to meet your heroes, but not with Buddy. Last time I played with him was alongside Jimmie Vaughan at the Paramount Theatre, in Oakland, just a few days before Covid started shutting everything down.

What’s it like to play next to them?
It was a total thrill. I felt like a million bucks trading licks with them in my hometown. The energy from moments like that inspires me every day, and makes me want to always keep playing and pushing my boundaries as a guitar player, producer, and songwriter.