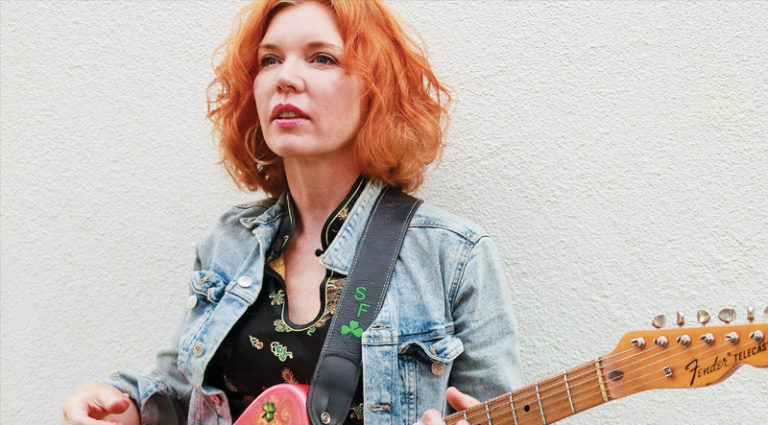 Sue Foley’s Paisley-finished Telecaster is the one guitar to which she has remained true since her debut album, Young Girl Blues. After 29 years, it only seemed right to dedicate her new album to the steadfast instrument by calling it Pinky’s Blues.

Hailing from Canada, Foley grew up in a guitar-playing household where classic blues and early Rolling Stones discs stole her heart. In the early ’90s, she moved to Austin and has been based there since, drinking in Texas-blues history.

The new album features Pinky front and center in a power trio with drummer Chris “Whipper” Layton and bassist Jon Penner, along with producer Mike Flanigin adding Hammond B3 to select tracks. The sound is live and loud with scads of hot riffs and tasty licks, all inspired by classic Texas blues.

VG talked to Foley just before her first tour since the pandemic.

What is it about the blues that has inspired you all these years and kept you going?
The blues is so deep – you can never get to the bottom of it. It’s a constant challenge. It’s something you grow with in time, as your story grows and evolves. To me, it’s the purest form of music – it’s so organic. And it’s constantly changing, but never really changing. I keep finding inspiration in it, keep going back to the same few records I’ve had since I was a teen – Memphis Minnie, Earl Hooker, Willie Dixon, Muddy Waters, Bessie Smith.

Your riff on “Dallas Man” is a sizzler.

That was a happy accident. I was trying to figure out something by Frankie Lee Sims, and he’s one of those guys who’s really hard to cop; his style is simple, but not easy to figure out because he’s got his own thing. I couldn’t get it, but I came up with this riff in the process and wrote the song around it, which pays tribute to all those guitar players that came out of Dallas-Fort Worth – Frankie Lee Sims, Blind Lemon Jefferson, T-Bone Walker, the Vaughan brothers, Denny Freeman and Derek O’Brien, Anson Funderburgh, Zuzu Bollin; I could keep going. There’s a whole mystique to that area.

Your version of Angela Strehli’s “Say It’s Not So” came together organically?
I was just messing around with it at home a bit and in the studio, then sort of started playing it, which is why I solo at the beginning and the band falls in. We cut it once, live off the floor, no overdubs.

“Hurricane Girl” is a scorcher.

I started writing that after the last of the big hurricanes came through Austin. I just thought it’d be a cool concept; a woman who wants to go and mess up some guys, you know? It’s built around an Elmore James kind of vibe.

What’s the story behind Pinky herself?
I bought her brand new around 1988, in Vancouver. I saw it at a store and was like, “I have to have that!” Everybody told me to play a Strat, but I wanted to be a Tele player like Muddy Waters and Albert Collins.

Of course, the finish is now peeling off, but it has carried me through 33 years. I’ve never changed the pickups, never modified it. I’ve had a tech refresh it a few times, but she’s been with me at almost every show and on every album I ever made.
The only change happened after the Tone knob fell off at a gig and somebody stuck a Strat knob in its place. Now I don’t have to look down when reach for it; I feel it.

Do you have a backup?
I actually have two new Pinkies I bring on the road these days.

What kind of amps and effects did you use on the album?
I used my reissue Bassman and we had it really opened up loud. Our engineer, Chris Bell, had four or five mics catching it, plus a few room mics. He got a big tone out of that – there’s some real magic going on there.

I have a Strymon tremolo/reverb and an Xotic RC Booster, but I prefer a very, very organic sound – just me and my guitar.