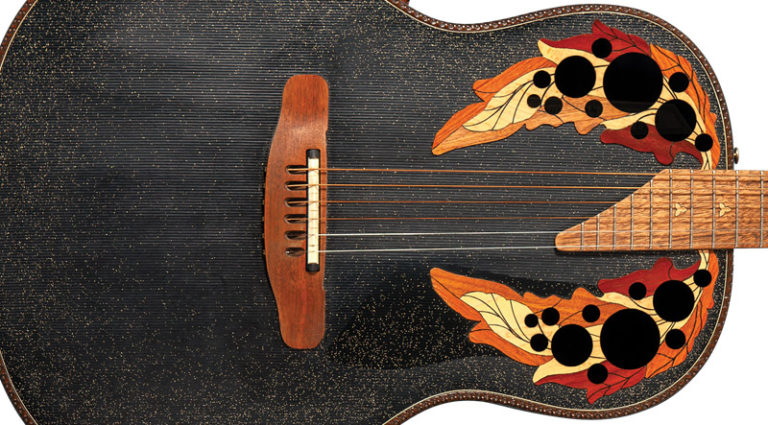 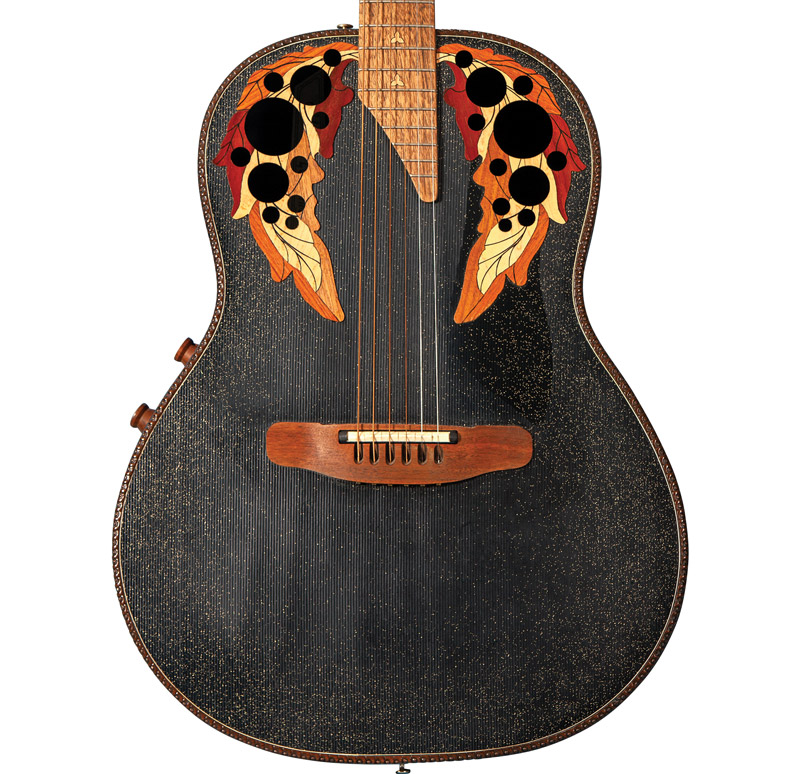 What do you get when you cross a helicopter with a Martin dreadnought? Easy answer – Ovation guitars, perhaps the greatest champion of alternative materials in an age when traditional woods like Brazilian rosewood and Honduran mahogany have become virtually extinct. Among Ovation’s alt-material creations, the Adamas is the ultimate expression.

The father of Ovation guitars was Charles (Charlie) H. Kaman (1918-2011), a man driven by two passions – engineering, and playing guitar. Kaman chose aeronautical engineering and, in 1945, got a job with helicopter pioneer Sikorski, in Bridgeport, Connecticut. Eventually, differences of opinion led Kaman to start the Kaman Aircraft Corporation.

Like any true guitar fanatic, Kaman kept one at work, for inspiration and diversion. Connecticut can be warm in the summer, very cold in winter. As a result, Kaman made his share of trips to the Martin factory, having repairs made, like splits in tops.
In 1965, he conceived a “better” guitar, specifically, one he could hang on his wall without fear of cracking. He set his engineers to work solving the problem using aeronautical principals applied to the guitar, focusing on the back and sides.

Kaman’s designers came up with a spruce-topped guitar with a molded fiberglass body. They called it the Lyrachord, and among the first players to embrace it were folk/bluesman Josh White and jazz/classical fingerstylist Charlie Byrd. When Byrd was shown a prototype, the legend exclaimed, “This guitar deserves an ovation.” A name was born!

Despite those early endorsements, Ovation guitars might never have taken off were it not for Glen Campbell, the Arkansas singer/songwriter who scored big in ’67 with the pop-folk ballad “Gentle On My Mind.” With Ovation, Campbell devised a signature model in ’69 – the year his “Glen Campbell Goodtime Hour” variety show hit television airwaves. For nearly three years, Campbell played the show in front of a national audience, plucking his round-back Ovation. In 1970, Ovation developed its first acoustic/electric pickup system specifically for Campbell.

A surge in popularity of singer/songwriters through the ’70s added to Ovation’s success, the guitars’ durability and amplified sound proving ideal complements to the genre.

Kaman wasn’t one to rest on his laurels, and innovation continued to pour out of his company, including an array of refinements to the Ovation guitar and a fascinating (if ultimately unsuccessful) obsession with trying to crack the solidbody electric guitar market with its own designs.

In for a penny, in for a pound, Kaman soon turned his attention to the guitar’s top. As VG contributor/consulting editor Walter Carter relates in The History of the Ovation Guitar, Kaman’s objective was to replace traditional spruce and eliminate the “problems” caused by a round soundhole in the middle of the top. The idea was to make the top as thin as possible (to increase resonance) while maintaining structural integrity. The soundhole creates a void in the middle of the stress lane that runs from head to bridge. This requires added bracing, which dampens vibrations.

The puzzle was solved with a top consisting of paper-thin birch sandwiched between two thin layers of carbon graphite. This allowed the top to be a mere 1/32″ thick – thin enough for great vibration yet strong enough not to cave when tuned to pitch. Twenty-one variously sized soundholes were moved to the top’s upper bass bout and given wooden “leaf” designs called “epaulets.”

Add a walnut neck with the company’s revolutionary “Kaman bar” reinforcement (a hollow/inverted T-shaped piece of cast aluminum) under the epoxy-infused walnut fretboard, “carved” hard-foam for the bridge and headstock, and an optional stereo pickup with EQ, and you have the Adamas, introduced in 1976.

Enthusiastically received by the guitar press and pros like Larry Coryell, the Adamas had a harder time with average players because guitarists are a pretty conservative lot and the sticker price over $2,000 was hefty for any guitar in the late ’70s. In ’81, Ovation introduced the “budget” Adamas II, which saved about $600.

The primary departures from the Adamas I are a five-piece mahogany and maple neck and a much simpler bridge and headstock design. Also, the II was offered only as an acoustic/electric with stereo output and an “EQ” that was basically a super-sensitive active Tone control. The neck has a thin V profile with a narrow nut and very electric-guitar feel – there’s no way it would be confused with a Martin! That said, it’s a great-sounding guitar, with a rapid, sharp, crystalline attack, well-separated string voices, plenty of reserve volume, and rich harmonic content. Amplified, it’s very clean.

How many Adamas IIs have been made is unknown. They’re still offered in a cutaway version. Serial numbers apply to all variations and reflect production output, which appears to be approximately 1,200 to 1,500 per year. However, there are many variations. How many were Adamas II 1681s is impossible to know; the highest serial number found in online lists is 17958, which would be 1999-2000, suggesting the 1681 may have been replaced by other models about that time.

In 2007, Kaman Music Corp. was sold to Fender Musical Instruments and Adamas guitars continue to be produced, technically separated from its helicopter parent but forever technologically bound to Charlie Kaman and aeronautics.