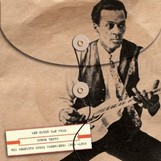 There was no single architect or originator of rock and roll; there were several. Any serious discussion would have to include Fats Domino, Little Richard, Ike Turner, Elvis Presley, Jerry Lee Lewis, Bill Haley, and a few others. And, of course, Chuck Berry.

In his essay on allmusic.com, the late Cub Koda is careful not to declare Berry as the most important forefather of rock but states that “none is more important to the development of the music” – and goes on to make a very convincing case.

Even more than his guitar playing, what set Berry apart was his songwriting – the clever wordplay he set against I-IV-V/12-bar-blues changes – aimed directly at Teenage America and striking the heart of that target audience with amazing consistency. Consider: Lennon and McCartney, Dylan, and Brian Wilson (arguably the greatest songwriters of rock’s next generation) wore Chuck’s influence on their sleeves. That alone would make him, by association, one of the most influential tunesmiths in the genre’s history, and he was also the strongest influence on rock’s so-called greatest band, the Rolling Stones.

Keith Richards is, in fact, one guitarist who actually studied Berry’s rhythms and intros. Note: those are plural for a reason; too many reduce Berry’s myriad variations and subtleties to one generic, bar-band form. Or in the case of artists who should know better, they either play everything too fast (Hendrix, Johnny Winter) or forget the swing element – in Dave Edmunds’ case, flattening out the groove; in the Grateful Dead’s, playing too busily for there to be a groove.

So, on the heels of Hip-O’s four-CD box of Berry’s complete ’50s output (Johnny B. Goode, released late ’07), this quartet of discs covering the remainder of his tenure with Chess Records is welcome indeed.

The previous set was chock full of classics, from 1955’s “Maybellene” to “Roll Over Beethoven,” “School Day,” “Sweet Little Sixteen,” “Back In The U.S.A.,” “Carol,” “Memphis, Tennesse,” and, of course, “Johnny B. Goode.” But, despite a prison stint and new movements like surf music and the British Invasion (both actually validating his importance), Berry continued to be a major player well into the ’60s.

The hits weren’t as frequent, but classics like “Nadine,” “No Particular Place To Go,” “You Never Can Tell,” and “Promised Land” proved he hadn’t lost his knack. The latter, essentially “Wabash Cannonball” reinvented, revealed Berry’s hillbilly influence; another key element was big-band swing a la Benny Goodman and Harry James.

There are some clinkers here (like the sappy “Diploma For Two”), but there are plenty of hidden gems, like his steel guitar instrumental “Mad Lad,” two extended jams from his Two Great Guitars collaboration with Bo Diddley, should’ve-been-hits like “It’s My Own Business,” and a previously unreleased live set from ’63.

The beauty of the set is that there’s no picking and choosing; you get it all – 108 tracks, rarely seen photos, extensive liner notes by Fred Rothwell, and sessionography (revealing that Matt Murphy played rhythm on “Bye Bye Johnny” and Mike Bloomfield and Paul Butterfield were overdubbed on “It Wasn’t Me”). Like its predecessor, this is a no-brainer.