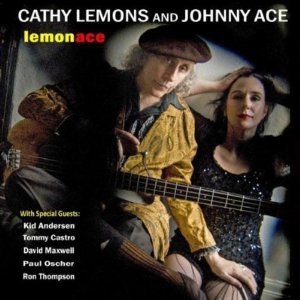 Lemons and Ace are veterans, and Ace’s resume contains the names of artists who simply would not put up with a bass player who couldn’t deliver – John Lee Hooker, Otis Rush, and Lowell Fulson. On Lemonace, he puts into play the invaluable lessons learned from working with them, the most obvious of them being to not overplay. That self-assurance allows him to really shine on mid tempo and slow numbers like “Used To These Blues” which also features wonderful Curtis-Mayfield-crossed-with-Funk- Brother-Joe-Messina guitar from Tommy Castro. Lemons seems at home on that kind of tune, too.

That strength is also on display in “Sink Or Swim,” where Kid Anderson’s rhythm guitar and band member Pierre Le Corre’s leads turn that tune into a veritable soul guitar clinic. Ace’s narrative raps there and elsewhere might be better suited for live shows, but the inclusion of even a single tune like the down-home showpiece “Shoot To Kill” (with extended slide-guitar solo from Corre and guest Ron Thompson) overrides such minor criticisms by a bluesy mile.