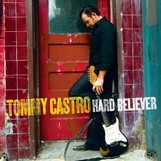 Tommy Castro makes the move to Chicago’s Alligator Records, and fittingly serves up one of the most focused and toughest records of his considerable career.

Contributing no doubt to the great guitar sounds, the fine songwriting, and the overall feel of the record is the production of veteran John Porter, who has worked with folks like Keb Mo, Otis Rush, B.B. King, and Elvis Costello.

It’s always been obvious Castro has the goods and while his records on Blind Pig have been well-done, they’ve never reached this level in a number of ways, including something as simple as guitar tone. “It Is What It Is” is just a shuffle, but Castro’s nasty vocal and guitar helps carry the song to another level. “Monkey’s Paradise” is a soul-funk tune that’s basically just a one-chord vamp with a gritty vocal and a meandering solo that mixes masterful soul playing with a mid-eastern feel mixed in. It’s easy to forget how a song that simple can sound so good in the right hands. “Trimmin’ Fat” has a very clever lyric that deals with today’s economic reality while maintaining a good-time feel. Porter, who supplies rhythm guitar throughout the record, fills up that tune with a nasty slide solo. All of the Castro originals work on pretty much every level. He even touches the jazzy side of soul on “The Trouble With Soul.” Great changes and a soulful solo make it the perfect closer for the record. Castro’s got one of those voices that sounds like he gargles dirt and smokes Camels. Like his guitar playing, it also is full of soul. His choice of covers is pretty much perfect. “Ninety-Nine and One Half” is a slice of Memphis soul that the Bay area stalwart has absolutely no problem bringing to the West Coast. His version of Allen Toussaint’s “Victims of the Darkness” is a plea for understanding. And, his version of the Righteous Brothers “My Babe” is a loud soul shuffle that fits his style perfectly. It’s obvious with Hard Believer that Castro is upping the ante. In the R&B world of 2009, he has to be considered one of the top contenders for the crown.