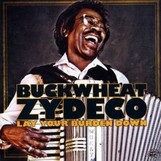 Singer/ accordionist/ keyboardist Stanley “Buckwheat” Dural became a popular solo act in the zydeco world years before the unchallenged King Of Zydeco, mentor (and former bandleader) Clifton Chenier, passed away in 1987. While helping to fill that void, he (like Zachary Richard and the late Beau Jocque) had no compunctions about zydeco-izing rock and pop material – including a remake of “Why Does Love Got To Be So Sad” (on 1988’s Taking It Home), with Eric Clapton cameoing on guitar.

After his major-label stint with Island, he bounced around to various indies, and has now arrived at Alligator. The eclecticism is still very much a part of his M.O. – if anything, better achieved here, likely thanks in part to producer Steve Berlin, of Los Lobos fame – embracing everyone from Bruce Springsteen to Jimmy Cliff to Captain Beefheart.

The album kicks off with “When The Levee Breaks,” entering with the guitar of Sonny Landreth, who proved that slide and zydeco are a perfect marriage during his (and Buckwheat’s) stint with Chenier. Most fans know the song from Led Zeppelin’s version, but it dates back to Memphis Minnie and its composer, Kansas Joe McCoy. This eerie reading packs a powerful punch, no doubt fueled by the fact that both Dural and Landreth hail from South Louisiana – Hurricane Central in recent years.

Landreth is also onboard for J.J. Grey’s “The Wrong Side” – a melodic shuffle in the vein of Doyle Bramhall’s “Is It News” – delivering more beautifully slippery fills and solos. Allman Brother (and Gov’t Mule leader) Warren Haynes supplies the tasty solo on the album’s title track, which he co-wrote.

But the portion of the CD not inhabited by such star power is far from lacking, thanks to Buckwheat’s crack band, augmented by Trombone Shorty and Berlin’s baritone sax. Guitarists Olivier Scoazec and Michael Melchione are no slouches, and you’d be hard-pressed to find a funkier bassist than Lee Allen Zeno. Likewise, the talents and charisma of Dural, who had a hand in writing five of the set’s 11 tunes, shine brightest, as usual.