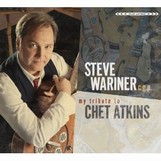 Wariner has scored more than 40 Top 30 country singles on his own, about a dozen of them reaching #1. But rarely does guitar playing place you at the top of the charts, no matter how good you are. Much like George Benson or pianist Nat King Cole, the instrumental prowess of Wariner, like country stars Brad Paisley and Vince Gill, is just extremely tasty icing on the cake – secondary to his singing and songwriting in terms of commercial success.

As with Paisley’s The Guitar Album, it’s refreshing when such a superstar puts out an album filled with picking, just for us guitar fans – and for themselves. In the case of Wariner (who released a fine, all-instrumental outing with 1996’s No More Mr. Nice Guy), it’s especially heartening, because, while displaying his own six-string talents, the 54-year-old’s latest CD focuses on his mentor, Chet Atkins.

Steve (who played bass in Atkins’ band) provides the bass on several tracks, in tandem with brother Terry’s drums on the opening original, “Leaving Luttrell,” named for Chet’s Tennessee hometown. The keys to the song’s (indeed all the songs’) success are Wariner’s mastery of the subtleties of Atkins’ style, not the flash – something as simple as the way Chet would dip the whammy bar “just so.”

Two cuts simultaneously pay tribute to Chet and acts he signed to RCA: Jerry Reed (“Reeding Out Loud”) and Los Indios Tabajaras (“Blue Angel”). On the latter and the poignant closer, “Silent Strings,” Steve gets a beautiful tone from his Del Vecchio gut-string resophonic.

Wariner may not be as dazzling as, say, Tommy Emmanuel (another of Chet’s mutual admirers), but he probably comes as close to Chet’s spirit – that ability to be laid-back and energetic at the same time, making daunting passages appear effortless – as anyone ever has.

Steely Dan – Everything Must Go