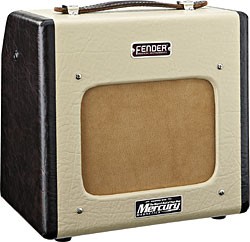 Fender’s tiny Champion 600 is aimed at the guitarist who requires rich power-tube distortion at low volume levels. With just one 6V6 power tube putting out five watts, getting the little Champ to scream is no problem.

Introduced after Epiphone’s similarly-sized Valve Junior, the Champ 600 has a smaller (6″ compared to the Epi’s 8″) speaker, but the Champ is much more compact at 11″ wide x 12″ high and 71/2″ deep. And at only 15 pounds, travelers can appreciate that it easily fits into a large suitcase (and leaves 35 pounds for jeans, toothpaste and Rogaine before the friendly ticket agent demands an additional $25).

Out of the box, the Champion 600 is an acceptable practice amp. But the word “acceptable” doesn’t mean much to the folks at Mercury Magnetics. Just as they did with the Epi Junior, Mercury conscripted Alan Cyr to devise a circuit that would bring the new Champion 600 closer to the sound of the coveted and increasingly rare Champ of the 1950s.

First thing to go was the speaker, which Cyr deemed the most limiting feature of the stock package. A suitable replacement came from Ted Weber. Next thing to be addressed was – believe it or not – volume. “The stock unit was not very loud, even for five watts,” Cyr noted. “There’s a tone stack without tone controls built in to the stock unit with fixed resistor values. Also, there were some slope resistors to make the tone less harsh. They were trying to mimic a ’50s amp that had an octal tube socket with a miniature nine-pin dual-triode tube. Running the signal through a resistor bleeds off high frequencies as a sort of low-pass filter.”

What Cyr ended up with was not a purely Champ circuit because it lacked a negative-feedback loop. Then Mercury changed the preamp and power amp transformers, and added a choke to create some filtering. They also eliminated about a dozen parts, greatly reducing parasitic loss of tone, which means the circuit most closely resembled a blackface Champ with a couple of changed cap and resistor values, with the goal of keeping the character of the 6V6 tube without having to push too hard.

Mercury says anyone who has replaced pickups or a tone switch should be able to accomplish this mod in a few hours (but of course anyone should very carefully read the instructions).

Without a guitar plugged in and even with the Volume knob all the way up, the modded Champ is nearly silent. A Gibson Les Paul Special with Rio Grande P-90s plugged into the High input produced respectable, chimey clean tones, especially through the Special’s bridge pickup with the Champ’s Volume knob at 4 or lower. Moving the Volume dial clockwise revealed a variety of distortion tones. It starts with a nice edginess and works its way up to full song. While the stock unit got a little shrill toward the end of the dial’s sweep, the Mercury-modded amp stays smooth all the way to the stop.

Next up was an equally practical Traveler Escape EG-1 with humbucker in the bridge. Plugged into the High input, the EG-1 sang away with the Volume at 5 (this amp bests Nigel Tufnel by going to 12, by the way). After 6 it’s Dicky Betts, and 10 or beyond gives a fuzz that would have felt at home four decades ago in Golden Gate Park.

Plugging into the Low draws more character from the humbucker. There’s just a little more clarity and some nice Tom-Petty-style chime on the lower volume settings with the EG’s Tone knob on max. Twisting the amp’s Volume knob brings more distortion, but in refined degrees. Note clarity and definition remain through the entire sweep, and the amp is extremely touch-sensitive, even through the humbucker.

Combining the middle and bridge pickups through notch position four on a DeTemple ’56 plugged into the Low input, the Champion offered an amazing and well-balanced cluck. Position one (neck pickup) produced all the glass and steel it was intended to make, the middle position was clear yet warm, and the bridge pickup could be coaxed to an aggressive, Telecaster-like attack.

The High input got all three pickups searing with sustain in any combination at any volume setting above 5. Most notably, the bridge pickup came alive and the Champion scored a knockout by providing great note clarity in the notch two position, which combines the neck and middle pickups. If an amp is going to fail on clarity in the ninth round, this is where it’s going to happen.