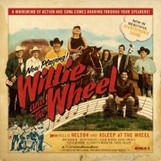 Aside from Jerry Wexler’s standing as a titan of R&B, soul and rock, his musical range extended far beyond. A lifelong country fan, Wexler enjoyed Hank Williams and Bob Wills when they were alive and touring. He was aware of Willie Nelson – who grew up playing Western swing around Abbott, Texas – in the early ’60s, when Willie, far from stardom, was renowned as Nashville’s hottest new songwriter. After meeting him at a party in Nashville in 1972, Wexler made him the flagship act in Atlantic’s short-lived country division. That same year, Asleep at the Wheel recorded its first album (for United Artists). Willie admired them from the start and a deeper bond developed when the band moved to Austin. Wexler also became friendly with AATW co-founder Ray Benson.

Even in retirement, Wexler still wanted to produce a Willie-AATW Western swing album. A few years ago, he sent Benson his reissue swing LPs with tracks he’d noted long ago as possibilities for Willie. For the most part, he wanted to stress the acoustic pre-WWII swing sound, wisely bypassing predictable Wills standards in favor of material from iconic Western bands including Milton Brown and his Musical Brownies, Cliff Bruner’s Texas Wanderers and post-war talents Spade Cooley and Hank Penny. The two finalized the song list in 2007. Failing health prevented Wexler from hands-on production, but he approved the final recording before he died last year at 88.

Most tunes come from the prewar repertoires of both the Musical Brownies (formed in 1932, nearly a year before the Texas Playboys) and Bruner, a onetime Brownies fiddler. Everyone’s strong on “Hesitation Blues,” “Sweet Jennie Lee” “Sittin’ On Top of the World” (a duet with McQueen) and “Oh! You Pretty Woman.” A full-bodied rendition of Bruner’s “Ain’t Gonna Give Nobody None O’ This Jelly Roll” compliments “South,” the Kansas City jazz instrumental most Texas bands (including Wills) played, with a piano cameo from Paul Shaffer and a blazing Vince Gill guitar break. Two numbers reflect postwar swing: a straightforward remake of Spade Cooley’s 1945 “Shame On You” and Hank Penny’s “Won’t You Ride In My Little Red Wagon,” a tune Willie has recorded before.

Willie is an American institution and after 40 years, Asleep at the Wheel is in a similar zone. Their 1975-’80 big band remains their peak moment, but this is the most powerful and dynamic incarnation Benson has led in years. They not only offer a more rounded, funkier picture of Western swing’s beginnings, they helped the legendary Wexler pull off one hell of a final act.

This article originally appeared in VG‘s May ’09 issue. All copyrights are by the author and Vintage Guitar magazine. Unauthorized replication or use is strictly prohibited.

Marty Robbins – Live Classics from the Country Music Hall of...