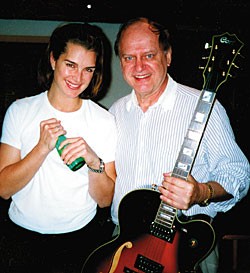 Casher with actress Brooke Shields at a soundtrack recording session.

He’s called “The Papa of the Wah-Wah Pedal” and has been a top session cat since the early 1960s, introducing the Ecco-Fonic and wah pedal to film scores. He’s also an unsung hero of the recording industry whose love of technology made him the perfect candidate to usher in a whole new era of sounds and guitar effects that still resonates today.

Vintage Guitar: Do you see yourself sort of as the bridge between the old-guard session guys and the younger guys who could add a rock sound.
Del Casher: Absolutely. I came from the school of having to learn my harmony, my chops, my chord progressions and learning how to write what I had played. I saw this revolution happening. The older guys from the big-band era, were different. When they tried to play a rock date, the flair just wasn’t there because they hadn’t grown up with it. I grew up hearing Elvis Presley and Chuck Berry. I was playing tunes that had 30 chords, so it was easy for me to look at a chart.

I played a lot of record dates for Motown, and they were fun – you could really show your stuff. I wasn’t part of The Wrecking Crew, but I was certainly being called in along with them.

How did you hook up with Elvis?
I got a call from the music director at Paramount Pictures. He said he wanted me to do a film with Elvis, called Roustabout. He said, “You’ll have to be on the set with Elvis, because they’re going to need somebody to appear in the scene.” Well, the first thing Colonel Tom Parker said on the set was, “Nobody talks to Elvis!” On the fourth day, we broke for lunch and I started practicing. Elvis was sitting in the director’s chair, staring at me. So I start rippin’. Five minutes later, he walks up very humbly and says, “I’d give anything if I could play guitar like that.” He was so nice.

That afternoon, I was back onstage, and the other musicians were in a closeup shot with Elvis. I’m staring at the ceiling while we’re filming, and Elvis suddenly ran over to me and said, “You’re in the movie! I want you to be with me!” Then he ran to the cameraman to make sure he wasn’t blocking me out. He blocked the scene in such a way that the spotlight would be on him and myself.

What have you been up to lately?
I’m recording several new projects called “The Americana Suite” with an orchestra. I’m doing tours and a bunch of personal appearances demonstrating some of my vintage guitars I’ve used over the years. I have a pending television show where I guest host. I’m still playing the guitar all the time and perform at every opportunity. I play to my audience; at the Viva Las Vegas Festival, it was rockabilly, which I love. So I played “Guitar Boogie” and “Freight Train,” which is sort of a country tune, but I take the guitar playing all over the world and play in a bunch of different styles. I play “Twelfth Street Rag” which is a fast tune. Some of these are things I’d done with The Three Suns back in the early ’60s, and the audience loved it because it’s retro. I played The Coffee Gallery in Altadena and the audience is a lot different. They want to hear some of my classical works. I play “Guitar On Fire” which is an original guitar flamenco work. I play several jazz works… a lot of Jerome Kern. My latest album is called Magic Guitar.

What kind of gear are you using these days?
The guitar I have for my jazz stuff is the R.C. Allen, which is sort of a copy of my Stromberg, which I don’t like to go out and play. I’m also representing Sunlite guitars, which are very much like Fenders. Of course, I still use my Gretsch Duo-Jet, and I still have my Strat. I have a collection of 60 or 70 that I’ve kept and always enjoyed playing.

For amps, I use one of my vintage Fender Deluxe Reverbs. I also have a tweed Fender Bandmaster, and an amp made by a friend named Russell Alee. It’s called Amp. I still have my Ecco-Fonic units working. If I’m doing a show where it’s really a truly vintage show, I’ll bring a vintage amp, a vintage Ecco-Fonic and a vintage guitar. I want to let them know that those guitars are still working and also I’m still working [laughs]!


This article originally appeared in VG‘s Nov. ’06 issue. All copyrights are by the author and Vintage Guitar magazine. Unauthorized replication or use is strictly prohibited.