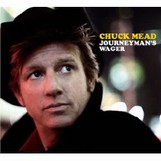 The BR549 co-founder’s new disc
is loaded with great stuff, including
his guitar work. In the band, Mead
split lead duties with Chris Scruggs
and Gary Bennett, but was more than
capable of handling the job on his own.
After Bennett left, he did, and Don
Herron picked up the slack, though
his main ax was pedal steel.

Mead makes this very good album
better by coming off comfortable,
practiced, and happy in his musical
skin. Check the Gene Clark-like “Albuquerque,”
the plaintive alt-country
of “A Long Time Ago,” or “She Got the
Ring (I Got The Finger),” co-written
with Jon Tiven. There’s hardly a dud
in the bunch. A version of George
Harrison’s “Old Brown Shoe” has
Vaughan deftly expanding on the rare
John Lennon slide lead, and Mead
giving an enthusiastic yodel at the
end. There’s no better way to illustrate
the effect of the kicks in store on this
excellent disc.