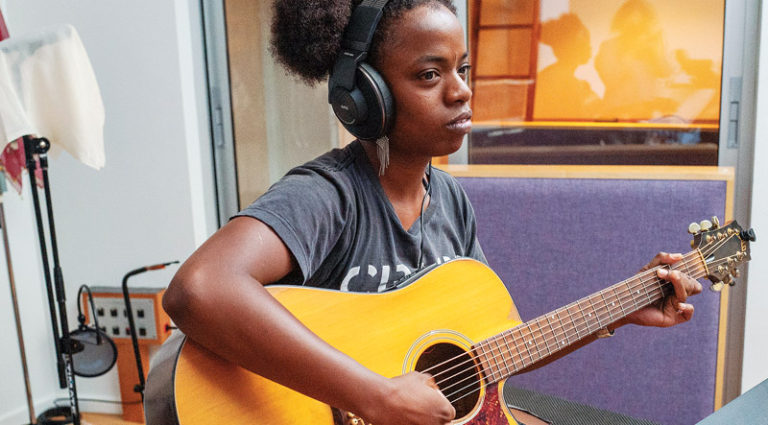 Sunny War’s latest album, Simple Syrup, digs deep into the complexities of the human experience. As an acoustic fingerstylist who draws inspiration from the world, being quarantined has been a challenge. You’d never know that from her new album, as she shares real stories of injustice and love in a troubled world. The music features cello and electric guitar, which expands War’s musical vision with richness and depth.

Patiently waiting for Covid to go away, she shared the realization with other artists who also felt stuck.

“It’s hard to play when you don’t know if you’re going to play again,” she said.

Did the pandemic itself or being unable to tour stop you from writing?
No, but I haven’t been as creative. If you mostly write about stuff that happens or get inspired by living, it’s hard. I can’t write about the same day every day for a year.

Was Simple Syrup written before the pandemic?
It was written in 2019 except for “Its Name Is Fear.” It was supposed to come out in 2020, but all the touring got canceled. Some of it was finished during the quarantine.

It’s cool to hear your acoustic techniques with other instrumentation.
The band is Aaron Davis on bass and Paul Allen on drums, and we played most of the songs live. The cello and saxophone were added later. The cello player is Niall Taro Ferguson. Also, Milo Gonzalez plays electric guitar on two songs. It was cool because that was the first time I ever played with a band live in the studio. That’s Milo on “Like Nina.”

Why do you have two versions of “Mamas Milk?”
Because the saxophone player messed up and said, “Oh s**t!” You can barely hear it, but we thought it was funny, so we left it in. They said to make one without it so they could play it on the radio. You can’t even hear it. I don’t get why you can say “Bitch” on the radio, but you can’t say, “S**t.”

What’s the story behind “Deployed and Destroyed?”
I wrote it after a friend called me from jail. I met him in Venice. He was a busker. He was a veteran, and he started doing drugs and going in and out of jail. The V.A. never really helped him. If they could have helped him, things would have been a lot different. He needed medication and he slowly got worse and worse. There was a lot of stuff they needed him to do with all the paperwork, but it’s not set up for someone who has PTSD. A lot of homeless people are veterans. They have mental stuff they didn’t have before they were in combat.

Are you still searching for things to express on the guitar?
I have to get an electric. I can’t keep playing the same stuff all the time. I gotta change it up. I might fix one of my old guitars that has been broken for a while. I had an Epiphone Les Paul that my mom got me when I was 12, and even though it’s a s****y guitar, I think it sounds cool. I’m still playing my ’89 Guild True American, which is the same guitar I’ve been playing for years. I like to use an amp when I can, but sometimes I run it through the board. I’ve also been thinking about pedals, but I need to play a different guitar – maybe a hollowbody electric.

What are your plans for the summer?
I have some shows, and I want to start on another album. I’m working on a couple of songs now, and while some people are fine meeting up and playing, some aren’t, so I haven’t had access to the studio. I want to do this as a band. I have to keep writing and have something ready. I make demos on my phone, and I’ve recorded some things for the band War & Pierce, which is me with Chris Pierce’s lyrics. But I don’t like [working alone] much because I get stuck doing the same track over and over. Being in a band stops me from being too obsessive. War & Pierce is more commercial and has harmonica and a mixture of drums and programmed beats. It leads me to do creative things that I wouldn’t do naturally.

What are your plans to promote Simple Syrup?
I’m planning a virtual release show which is as sad as it sounds (laughs). It just sucks. I can’t say I’m going to take it on the road or anything. I’m gonna take it on the internet (laughs)! See you on Zoom!