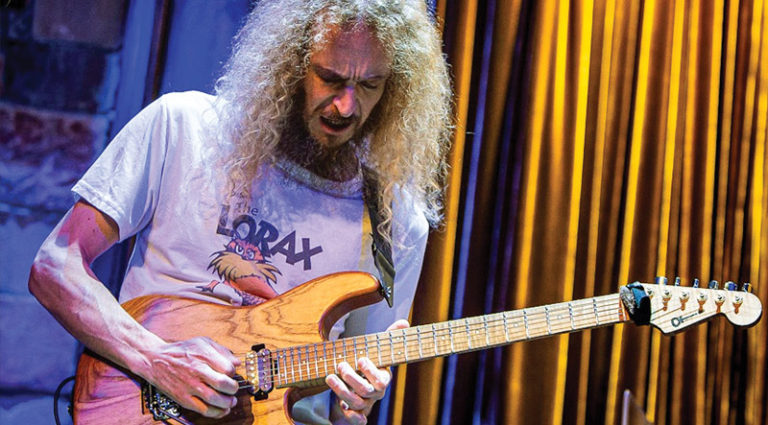 Guthrie Govan is at times more stunt pilot than conventional guitarist – his superhero skills mean he can play almost anything. Fortunately, with the Aristocrats, he deploys insane chops in the service of instrumentals that avoid the trappings of shred in favor of breathtaking rock-fusion.

Govan’s work can be heard alongside bassist Bryan Beller and drummer Marco Minnemann on the new album, Freeze! Live in Europe. He recently gave VG the backstage scoop.

This record sounds like the Aristocrats are having fun onstage – as if you’re genuinely engaged and playing with each other.
Essentially, that’s it! We do have a serious side in that we really care about playing as well as possible, but we also have an understanding that it’s okay for anyone to veer off on a tangent if inspiration should suddenly strike.

Everyone in the trio gets to be the lead instrument – it’s not just shred guitar over a heavy rhythm section.
Thank you, that’s precisely what we’re trying to achieve. It’s heartening to hear the mission statement coming across loud and clear.

“Spanish Eddie” is whimsical, but with dazzling guitarmanship. Does the trio map-out parts?
We never write anything out. Whenever one of us writes a new song, it always takes the form of an audio demo and we send MP3s to each other. In the case of “Spanish Eddie,” I wrote a lot of detailed harmonic parts. The jam section in the middle, before the silly pseudo-flamenco breakdown, consists of nothing more elaborate than a basic chord progression. The ostinato guitar section sounds suspiciously like two-handed tapping, but it’s a combination of open strings and regular hammer-ons in drop-D tuning.

Who are your influences?
When I started, my musical world revolved around ’50s rock-and-roll like Elvis and Chuck Berry, but that morphed into more solo-centric players like Clapton and Hendrix. A big turning point came when I was 13 or 14 years old, and discovered the music of Frank Zappa, Steve Vai, and Yngwie Malmsteen. That was a double-barreled wake-up call, and somehow made the guitar feel new and unfamiliar again. I had a jazz-fusion epiphany in my teenage years, and would single out John Scofield as a player who struck me as a bridge between rock and the esoteric realms of chromaticism. I was also aware of the mighty Steve Morse and always had a particular soft spot for High Tension Wires. That record is really eclectic from a stylistic perspective.

What is that unusual effect in “Get It Like That” – a ring modulator?
Indeed it is! In my current live rig, all of the effects are provided by a Fractal FX-8, and its ring modulator has an optional pitch-tracking function. I need to travel relatively light, so my touring rig consists of the FX-8, a Victory V30 MkII head, and two Charvel Guthrie Govan guitars packed into a double Enki case so they could be checked as a single piece of baggage. We rent 2×12 or 4×12 cabinets at each gig. My drop-D guitar for that track was an ash-bodied variant of the Charvel design, whereas its standard-tuning sibling features the original basswood body/maple top construction.

There are a million superstrats on the market. What makes your Charvel different?
My goals with this model came largely from the way I play, which covers a fair amount of stylistic ground. I wanted a solidbody that could sound believable across a wide range of genres rather than serving simply as a “shred machine.” I was later happy to learn that John Mayer treated himself to one of my Charvel models and deemed it to have tonal merit. I thought that was quite a compliment, coming as it did from a great player who isn’t the target demographic for that guitar.

You have some rabid fans. Do you still get visited by the “guitar jury”?
The guitar-jury concept evokes memories of a group of enthusiasts who used to frequent my hometown jazz-fusion gigs years back. They would begin their evening by imbibing alcohol with commendable enthusiasm. By the end of the second set, it wasn’t uncommon to hear them shouting for specific techniques in the middle of my solos; “Do a three-octave sweep arpeggio!” or “More tapping!”

How has your audience evolved?
When we started the Aristocrats a decade ago, people would typically come to a show hoping to witness some kind of shred supergroup, demonstrating death-defying feats of technical wizardry. Nowadays, there’s a more-palpable sense of fun in the air. It’s great to see an audience absorbing the sheer joy we derive from playing music together, rather than just waiting to be impressed by instrumental trickery. I’m grateful there are people out there who feel so strongly about the way we play. These are the people who enable me to make music for a living.